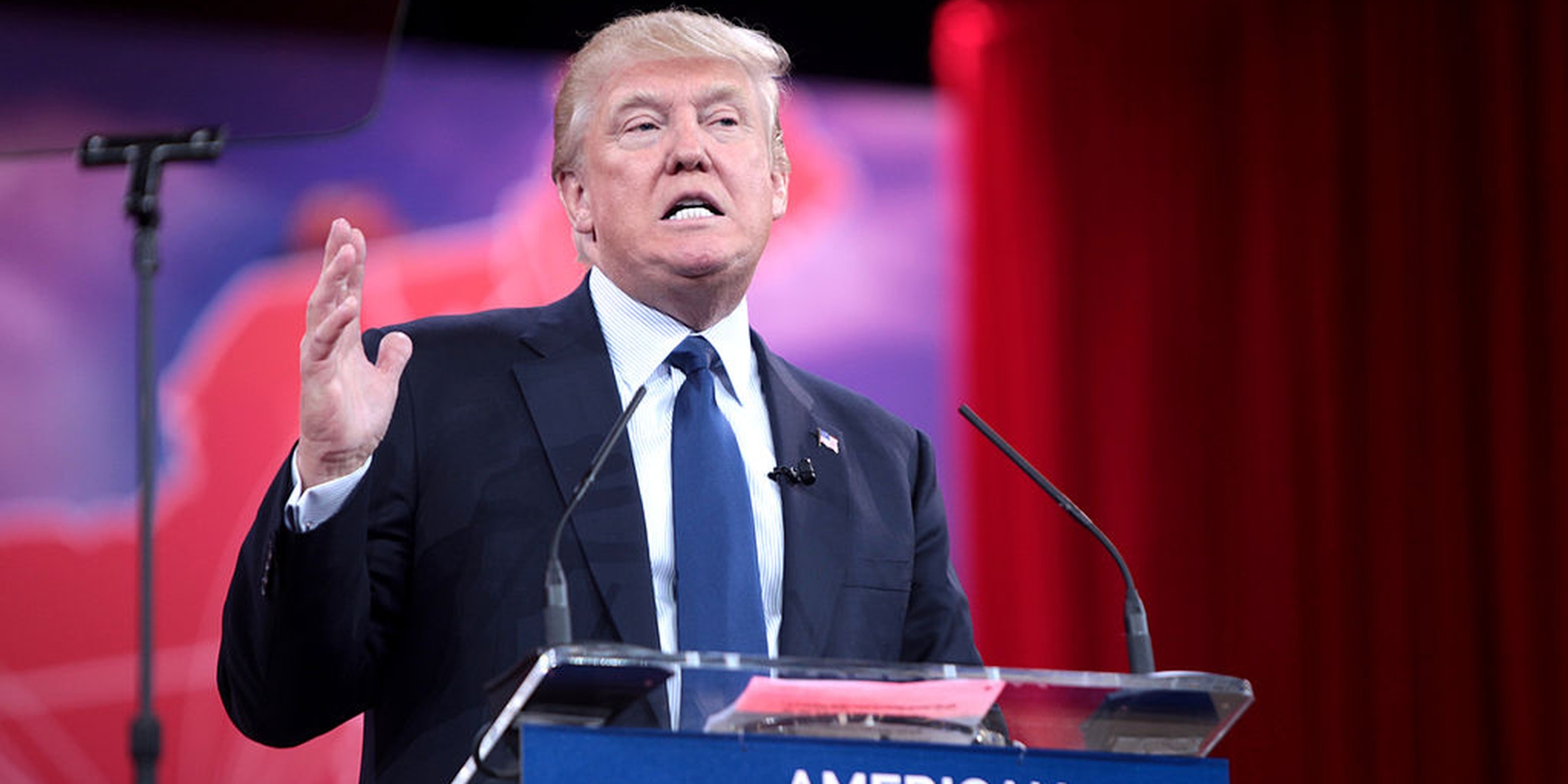 'How do you like that? I just thought of that. Boycott Apple.'

Republican presidential frontrunner Donald Trump on Friday called for a boycott of Apple products over the company’s refusal to help the FBI unlock a terrorism suspect’s iPhone.

Apple vowed to fight a California magistrate judge’s order compelling it to give the FBI a software package that would disable security measures on the phone, which was used by Syed Rizwan Farook, one of the perpetrators of the San Bernardino shooting.

“How do you like that?” he continued. “I just thought of that. Boycott Apple.”

“Here’s the thing,” Trump added. “First of all, the phone’s not even owned by this young thug that killed all these people. The phone’s owned by the government. Not even his phone. We don’t even have to go that far.” The phone in question was issued to Farook by his employer, the San Bernardino County Department of Public Health.

“But Tim Cook is looking to do a big number, probably to show how liberal he is,” Trump said, referring to the Apple CEO, who denounced the court order in a public letter released early Wednesday. “But Apple should give up—they should get the security—you’ll find other people.”

“Boycott Apple until such time as they give that information,” Trump said. “I think that’s a great idea.”

The FBI sought the court order to force Apple to write a software package that disables the auto-erase feature, which wipes the phone’s data after 10 incorrect passcode attempts. With that feature effectively disabled, the FBI could flood the phone with passcode attempts and eventually unlock the device—a technique called “brute-forcing.”

But Cook argued that complying with the government’s demands would set a dangerous precedent that could empower authorities to later demand a backdoor into the encryption protecting Apple products, thereby making every iPhone less secure.

Trump has criticized Apple’s handling of the case since it announced its intention to fight the court order. “I agree 100 percent with the courts,” Trump told Fox News on Wednesday. “In that case, we should open it up. I think, security overall. We have to to open it up, and we have to use our heads.”

Around the same time that Trump announced his boycott, he or someone affiliated with his campaign tweeted about his campaign funding strategy from Twitter‘s iPhone. 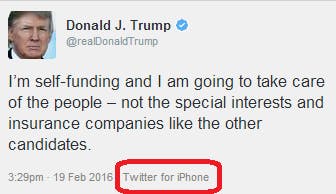 The Trump campaign did not immediately respond to a request for comment, but Trump soon tweeted that he would discontinue his own iPhone use.

I use both iPhone & Samsung. If Apple doesn't give info to authorities on the terrorists I'll only be using Samsung until they give info.

Hopefully others will follow suit. Our country needs & should demand security. It is time to get tough & be smart!

This is not the first time Trump has used his public platform and his status as an Apple shareholder to pressure the company to act. Over the course of nearly two years, he urged Cook to release a larger iPhone, which it eventually did—a fact that Trump took credit for as soon as it happened.

Before he was boycotting Apple, @realDonaldTrump spent almost two years begging them to make a bigger iPhone. pic.twitter.com/94MJGUvcpE

The debate over the iPhone unlocking order has divided the Republican presidential field.

Texas Sen. Ted Cruz backed the government’s position during a CNN town hall on Wednesday night, saying he believed Apple should comply with the court order.

“They have a binding search warrant,” Cruz insisted. “Any time you’re dealing with issue of security and civil liberties, you’ve got to balance them both, and I think we can walk and chew gum at the same time. We can protect ourselves from terrorism and also protect our civil rights.”

“If we passed a law that required Apple and these companies to create a backdoor, number one, criminals could figure that out and use it against you,” Rubio said at the same event. “And number two, there’s already encrypted software that exists, not only now, but in the future, created in other countries. We would not be able to stop that.”

“If you create a backdoor,” he said later, “there is the very distinct possibility that a criminal gang could figure out what the backdoor is.”

While Trump’s call for an Apple boycott instantly draw a maelstrom of conversion, NSA whistleblower Edward Snowden likely had the hottest take.

can we boycott trump instead