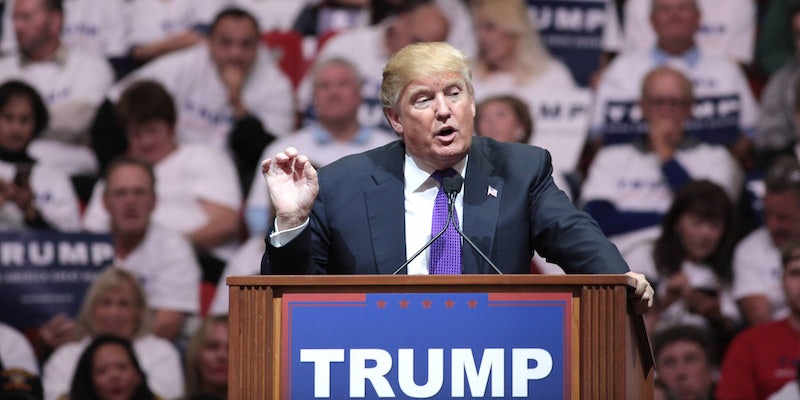 It appeared online more than a week before he tweeted it.

Donald Trump tweeted (and eventually deleted) a much-criticized photo of presumptive Democratic nominee Hillary Clinton on Saturday that critics called anti-Semitic. It appears as if Trump was utilizing his standard technique of essentially retweeting without abandon. And, as it turns out, the graphic didn’t originally come from the Trump campaign.

The original Trump tweet first appeared on Saturday morning and quickly drew criticism and accusations of anti-Semitism. The graphic showed Clinton and the words “History made,” but it also included a Star of David on top of a pile of money. The text on the Star of David read “Most Corrupt Candidate Ever!” The graphic is implying that Clinton has been bought with Jewish money, a pillar of anti-Semitic conspiracies. 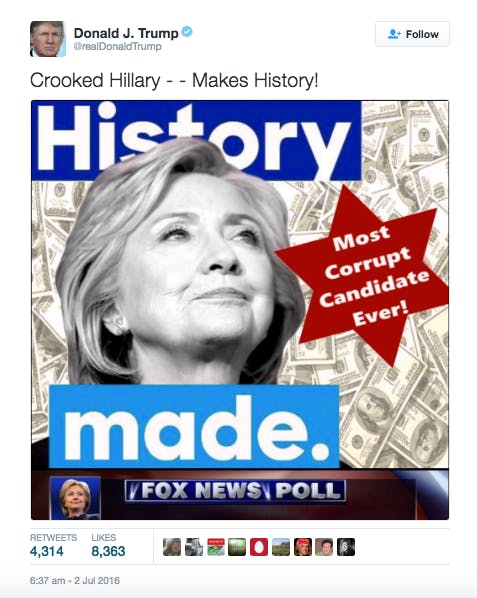 It took Trump—or the people on his staff who reportedly took control of his Twitter account—close to two hours to put up a new version of the graphic, which replaced the Star of David with a circle. The original version stayed online for at least four hours after the new tweet was posted, according to an archived timestamp.

That rendition still remains online, even as reporters pointed out the hasty edit job; you can still see a couple of points from the Star of David sticking just outside the circle.

According to Mic, the photo originated on /pol/, a forum frequented by Neo-Nazis and white supremicists on 8chan, on June 22—a full 10 days before Trump tweeted it from his account. The thread is no longer online except in an archived version, but the photo is visible after scrolling most of the way down the page. The name of the file is “hILLhISTORY,” which Mic points out might allude to a Neo-Nazi code. 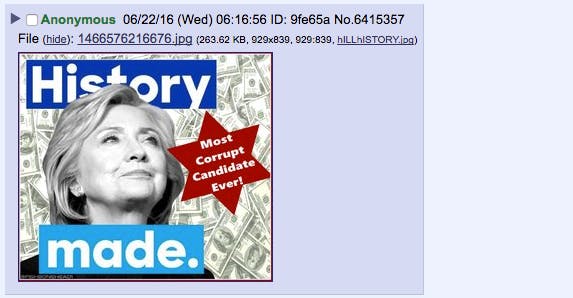 The /pol/ thread is full anti-Semitic and anti-Clinton memes as well as racist rhetoric.

When asked about Trump’s tweet on CNN’s State of the Union Sunday morning, former Trump campaign manager Corey Lewandowski said that people such as Resurgent writer Erick Erickson were making a big deal out of “something that wasn’t there” and pointed out that the six-pointed star was also similar to ones that sheriffs wear.

“Look, a tweet is a simple tweet, and the bottom line is you can read into things that aren’t there,” Lewandowski said. “You know, this is a simple star.”