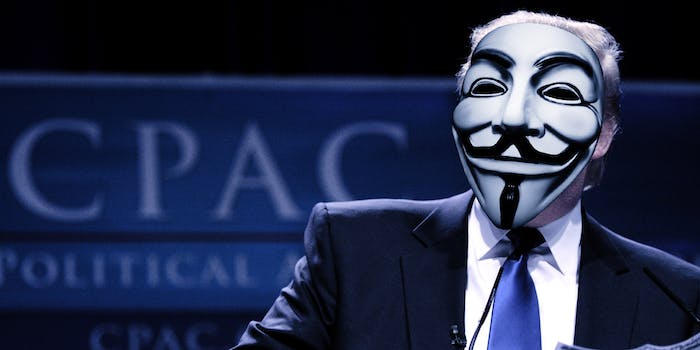 Will this video leave Trump shaking in his fine Italian loafers?

Watch out, Donald Trump—Anonymous is coming to get you.

The boisterous hacktivist collective released a new video this week promising to wage “total war” on the Republican presidential frontrunner.

“Dear Donald Trump, we have been watching you for a long time and what we see is deeply disturbing,” a masked figure announces in typical Anonymous style.

The video then plays a montage of the many controversial things Trump has said during his presidential campaign.

“Your inconsistent and hateful campaign has not only shocked the United States of America—you have shocked the entire planet with your appalling actions and ideas,” the narrator continues. “You say what your audience wants to hear, but in reality you don’t stand for anything except for your personal greed and power.”

The narrator calls on fellow Anonymous activists to help “dismantle” the Trump campaign through cyberattacks on Trump’s Web properties and other disruptive activities, an “operation” dubbed #OpTrump. The date of attack: April 1.

“We need you to shut down his websites, to research and expose what he doesn’t want the public to know. We need to dismantle his campaign and sabotage his brand,” the narrator says. “We are encouraging every able person with a computer to participate in this operation. This is not a warning, this is a declaration of total war. Donald Trump—it is too late to expect us.”

Anonymous and other hacktivist groups have taken on Trump in the past. In January, a group operating under the name New World Hackers successfully knocked Trump’s website offline.

Most recently, hackers leaked Trump’s voicemails to Gawker, though no evidence has emerged linking the people behind that leak to Anonymous.

These subversive efforts have had little effect on Trump’s bid for the White House. The New York billionaire and reality-TV star remains the leader in most national and state polls.