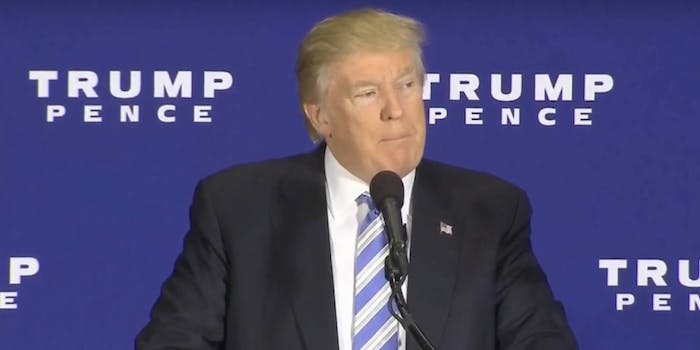 Trump continues to gaslight his accusers.

Republican presidential nominee Donald Trump held a rally in Gettysburg, Pennsylvania on Saturday. He discussed “the new thing,” (aka cyber attack) evoked Civil War imagery, and once again denied the mounting sexual assault allegations against him.

Trump at rally: "Every woman lied when they came forward to hurt my campaign" and "all of these liars will be sued" https://t.co/EnCpHR095Q

Trump claimed that every allegation of sexual assault against him from every single woman who has come forward is nothing more than a lie. He’s vowed to sue them once the election is over, which could complicate his plans to protest the election’s outcome were he not to win the presidency.

The Donald isn’t the only one reticent to concede. According to a Reuters/Ipsos poll, half of the Republican voters surveyed refused to accept a Hillary Clinton presidency while 70 percent of those polled believe that a Clinton victory would be the result of a rigged process and illegal voting.

It’s unclear if those Republicans believe that having Trump go after his accusers is the best use of his time following a potentially rigged general election. If anything, Trump may want to heed the advice of Reagan Legacy Foundation President Michael Reagan.

Great Speech @realDonaldTrump on policy but dump the suing the women as it will become the headline.Stay on message leave out the chicks..

The oldest son of former president Ronald Reagan may be onto something with that headline remark. The mention of chicks? Not a good look for the GOP, which is watching female votes slip away as Trump’s campaign continues to alienate them. Needless to say, the Donald’s Gettysburg address didn’t much help matters.