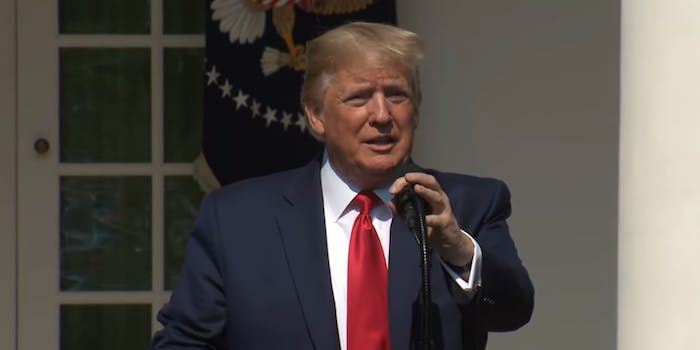 Trump's claims about 9/11 have been questioned in the past.

President Donald Trump claimed on Monday that he was “down there” at Ground Zero after the Sept. 11 terrorist attacks while announcing that he had signed a bill that would permanently fund the 9/11 Victims Compensation Fund.

He also then joked the stage might collapse with everyone on it.

The bill gained national attention after comedian Jon Stewart publicly lobbied for its passage and Sen. Rand Paul (R-Ky.) drew flack for halting its unanimous consent passage in the Senate.

During remarks at the White House about the bill being signed, Trump claimed he was at Ground Zero following the attacks, but wasn’t “considering myself a first responder.”

It has not been proven that Trump was at Ground Zero looking for survivors following the attacks, according to Snopes, despite his claims.

During the remarks, Trump also joked about the stage not being able to hold all of the survivors’ families and first responders in attendance, adding that if it collapses they would not be “falling very far.”

Just before signing the 9/11 victims compensation bill, Trump jokes with the first responders and their families that the stage may not hold all of them but that if it collapses they "are not falling very far" pic.twitter.com/h9qY3C7iHK