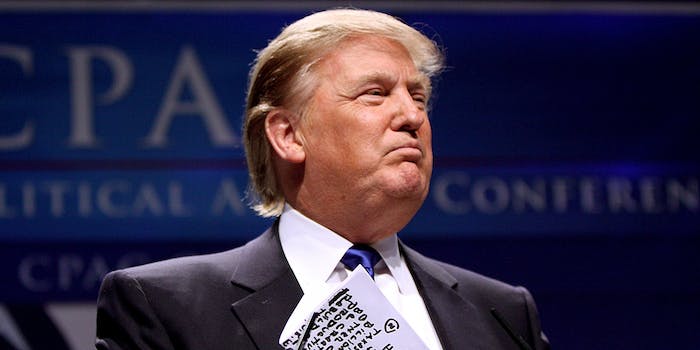 Donald J. Trump, the man who consistently tests the nation’s time-honored commitment to freedom of speech, pretended on Wednesday to be preparing a run for president in 2016.

We are not going to quote from the announcement, because that would be giving the work more attention than it deserves. Unfortunately, journalistic best practices do dictate that we point you to the memo so you can decide for yourself whether you are offended, disgusted, amazed, or simply disheartened.

Trump pretends to run for president every four years, and America has never been able to figure out why.

Has his hairpiece achieved sentience and begun whispering commands in his ear? Is he actively trying to waste the money he earns from such high-brow entertainment as The Apprentice and Celebrity Apprentice? Is he in fact a robot powered by the ignorant adulation of a few and the tired disdain of the many?

The mind boggles at the level of narcissism necessary to sustain this ridiculous exercise time after time, but every country needs a poster child for the worst of its worst, and Donald Trump has never been shy about his desire to fill that role.

We can’t snap our fingers and make Donald Trump disappear. But we can at least keep checking this Facebook URL and unfriending anyone who shows up there.