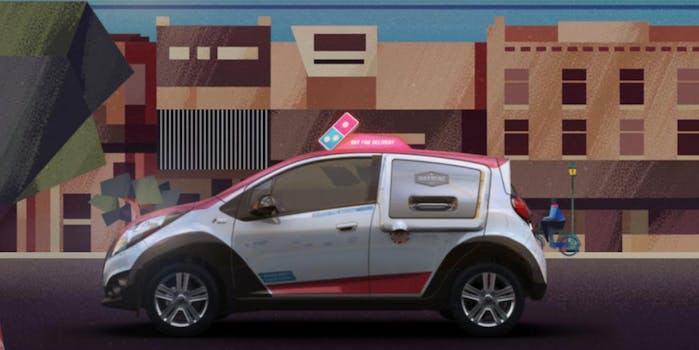 Your pizza will literally be fresh from the oven.

If you’ve ever complained about pizza being lukewarm when it arrived at your door, you should probably readjust your expectations of a business that sells an entire pizza for $5. Nevertheless, Domino’s has built a car specifically to satisfy your need for a burnt mouth.

Meet the Domino’s DXP (Delivery Expert), a modified Chevy Spark that strips out everything on the inside but the driver’s seat to make room for an in-car oven. The space left over is dedicated to storing other delivery essentials, including dipping sauces, drinks, and whatever other items you accidentally clicked on when you placed your order.

Domino’s USA President Russell Weiner describes the vehicle as “the first purpose-built vehicle aimed at revolutionizing pizza delivery” in a statement. “This innovation allows drivers to do their jobs with greater ease and efficiency, and demonstrates that Domino’s is absolutely fanatical about making perfect deliveries,” he continued.

Domino’s has other innovations in the field, according to the company, including: the corrugated pizza box, which the company invented in the 1960s; Domino’s Tracker, like a package tracker but for the impatient and hungry pizza consumer; the Heatwave bag, which was actually invented by Ingrid Kosar but the company was the first to use her invention; and ordering by text, Twitter, and emoji.

The Domino’s DXP came as the result of Domino’s Ultimate Delivery Vehicle Challenge, a crowdsourced design contest that drew 385 entrants from around the world tasked with crafting a better delivery car (though considering the current delivery standard is a pimply faced teen’s 1997 Honda Civic, it wasn’t a difficult task). General Motors and Roush Enterprises partnered to bring the winning design to life.

During the next 90 days, Domino’s will start rolling out 100 of the vehicles across 25 markets in the United States including Boston, Dallas, Detroit, Houston, Indianapolis, New Orleans, San Diego, and Seattle. If you live in one of those cities, get ready to complain about having to wait for your pizza to cool off before you can eat it.