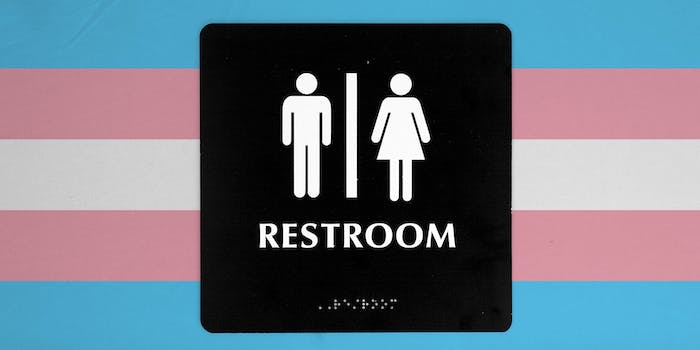 This could be the end of HB2.

North Carolina House Bill 2 (HB2), which makes it illegal for transgender people to use restrooms for the gender with which they identify, specifically violates both Title VII and Title IX of the U.S. Civil Rights Act, the DOJ said on Wednesday, which protect against discrimination on the basis of sex in the workplace and in education, respectively. North Carolina is at risk of losing millions of dollars in federal school funding if the state continues to implement HB2.

Our decision to discriminate is set to cost us even more money. #HB2 https://t.co/Bw2dQ4cBnI

“Access to sex-segregated restrooms and other workplace facilities consistent with gender identity is a term, condition, or privilege of employment,” wrote Vanita Gupta, principal deputy assistant attorney general, to North Carolina Gov. Pat McCrory and other state officials. “Denying such access to transgender individuals, whose gender identity is different from the gender assigned at birth, while affording it to similarly situated non-transgender employees, violates Title VII.”

Meanwhile, McCrory continues to insist HB2, which also contains provisions that affect workers’ rights and minimum-wage laws, has nothing to do with LGBT rights. “This had nothing to do with gay and lesbian,” he told a local radio show. “It had to do with privacy.” But the backlash against the legislation has been swift, with corporations pulling their business from the state. Many entertainers are also refusing to play North Carolina on their tours until HB2 is repealed, or, like Beyonce, are using their concerts to create awareness and drive funds to local LGBT charities.

Beyoncé wearing 'Y'all Means All' shirt in support of @equalitync. #HB2 #Equality pic.twitter.com/hzxoyXFh0J

The state has until May 9 to confirm that they will “not comply with or implement HB2.”