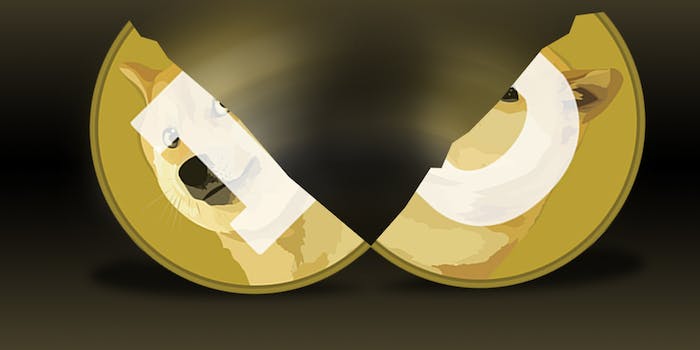 Hold onto your dogecoins: The ‘forkening’ is happening

Much warning! Dogecoin is in a state of emergency, and experts recommend you temporarily refrain from sending the meme-themed cryptocurrency to friends.

That’s because Dogecoin has “forked.” Dogecoin, like Bitcoin and every other cryptocurrency, relies on what’s called a blockchain: a giant database that keeps track of every user’s address, how much of the currency they have, and where the new coins are being mined. But at some point Monday morning, a glitch led to users working with two different versions of the blockchain: “the forkening,” as some users have dubbed it.

“Dogecoin just has so many more transactions than most of the other coins, it’s possible we’re just hitting growing pains other coins hit when they hit these transaction volume,” Ben Doernberg, a board member of the Dogecoin Foundation, told the Daily Dot. Indeed, Bitcoin forked just under a year earlier, briefly driving prices to a now laughably low $37 per Bitcoin.

Users at Reddit’s r/dogecoin reacted with typical silliness, posting photos of dogs holding forks and posing a ton of plastic forks with a computer.

While a few users have warned this could be a “very serious problem” Doernberg has faith it will be over soon.

“I’m not a developer, but my hunch is that it will be over by the end of the day,” he said.

While the fork is in effect, users are advised to not send coins to friends, as they may end up lost in the wrong fork.