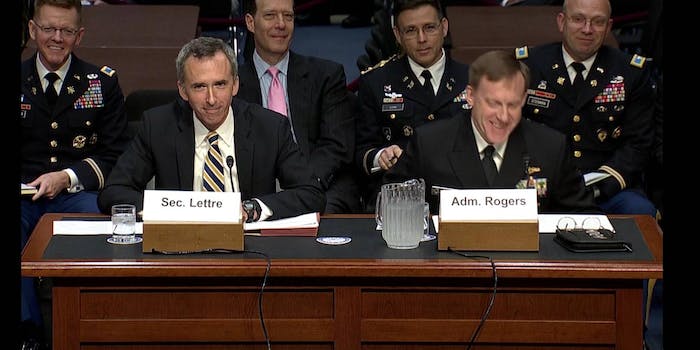 Encryption backdoors are not the answer, a Pentagon official says.

The White House and Pentagon are not looking for backdoors into encryption technology, according to one of the Obama administration’s top spies, but they are having “quiet” conversations with U.S. technology companies to address the issue of criminals and terrorists evading surveillance.

Lawmakers and military officials shed new light on the ongoing American encryption debate at a Tuesday morning Senate hearing focused on encryption and cyberwar while the specter of new anti-encryption bill crept up.

Sen. John McCain (R-Ariz.), chairman of the Senate Armed Services Committee, accused the Obama administration of “ignoring” the encryption problem and putting the U.S. at risk of falling victim to cyberwar and terrorism by the Islamic State and rival nation states.

Marcell Lettre, the under secretary of defense for intelligence at the Pentagon, insisted that the White House was making progress in a different way: Quieter and more friendly conversations with tech magnates and leaders. Crucially, these conversations have stayed out of the public eye.

“Legislation that forces a regulatory solution is not preferred,” Lettre said.

After a cacophony of debate and argument over encryption in the last year, Obama administration leaders moved further away from a broad one-size-fits-all solution. Instead, working “on a case-by-case basis,” Lettre said, “an effective, quiet dialogue with leaders in industry” means “the nature of the conversation shifts in a number of ways,” so that “often we are able to come up with solutions that meet our law enforcement and national security needs.”

The Obama White House’s weapon of choice against the changing cyber landscape is now, in this case at least, forging a more intimate relationship between Silicon Valley, the Pentagon, and America’s intelligence community through “quiet conversations” rather than public debate.

(Editor’s note: If you know anything about these quiet conversations, you should email the author of this article at [email protected] (PGP key available here).)

Lettre avoided specifics about what kind of solutions were met in these quiet conversations, what kind of data was being shared, and what oversight was in action, if any. No senator followed up. In a public setting like a Senate hearing, it’s commonplace to have military leaders stay mum on these sorts of issues until a classified hearing is held later on.

“We need to strengthen our partnership with industry to find ways to protect against the national security threats to the United States,” Lettre explained. He continued:

“We will continue to work closely with our industry partners to find innovative ways to outmaneuver malicious actors’ adoption of strong encryption, while ensuring that individual privacy interests are protected. I believe any steps we take as a government must be carefully considered to avoid introducing unintentional weaknesses in the protection of our commercial networks and national security systems. We should also be careful not to negatively affect our economic competitiveness as a world leader in technology, which could unintentionally drive technology innovation outside the United States.”

There was support for the White House’s “quiet”approach but few lawmakers seemed convinced that it was working as well as needed.

Sen. Jeanne Shaheen (D-N.H.) pointed to failures with companies like Apple and Twitter—for declining to unlock an iPhone for the FBI and for declining to let US intelligence scrape its data, respectively—as obvious examples of the “limits” to Lettre’s approach.

Whether or not the quiet route will work in Congress remains to be seen.

“If you don’t act, I guarantee you congress will act,” McCain warned, maintaining that louder and more definitive action is required.