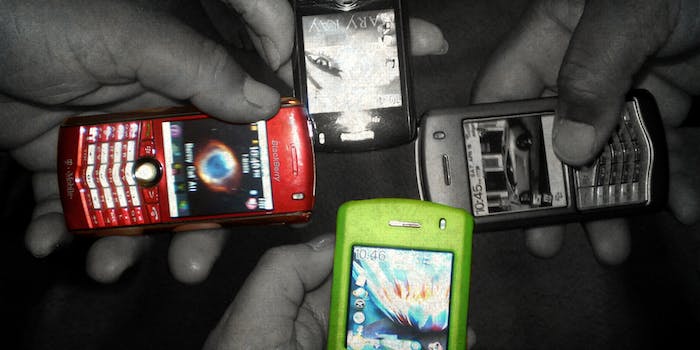 Photo via EvelynGiggles/Flickr (CC BY 2.0) | Remix by Fernando Alfonso III

Is your wireless carrier really letting you unlock your phone?

Technically, phone companies are finally supposed to let you unlock your phone. Do they?

A year ago, U.S. cell carriers agreed to implement more lenient unlocking policies. I compared what they committed to do with what they actually did. Here are the results: 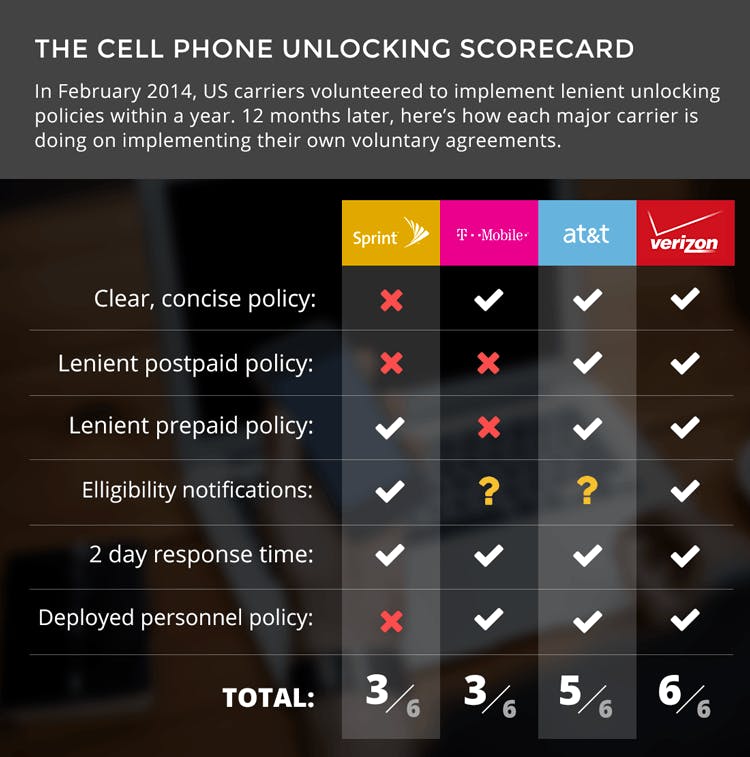 Back in December 2013, the wireless industry association CTIA wrote a letter to the Federal Communication Commission. In it, the trade group announced that all four of the country’s major carriers—AT&T, Sprint, T-Mobile, and Verizon—had committed to adopting six voluntary measures to make unlocking cellphones easier for consumers.

That “voluntary” agreement came at the last minute, after months of pressure from the FCC. In late 2012, the Librarian of Congress had removed an exemption from the DMCA for cellphone unlocking. Consumers were appalled. Without an exemption for using third-party software to unlock devices, the only way to break phones and tablets free from carriers’ software locks was by asking the carriers themselves. Trying to negotiate anything with a wireless carrier’s support center is infuriating, let alone an unlock code.

President Obama spoke out for the need for better unlocking practices, and the FCC threatened to impose new regulations on the carriers. But FCC Chairman Tom Wheeler gave the carriers an out: If they were able to commit to voluntarily improve their policies by the end of 2013, he wouldn’t push for regulation. So on Dec. 13, just a few weeks shy of Wheeler’s deadline, the carriers came up with their six voluntary unlocking principles and promised to implement them within a year.

Earlier this week, the FCC announced that it was “proud to report that the country’s major providers have met their commitment.” I’ve spent much of the last two years advocating for the right to unlock and modify devices (cellular or otherwise), so I was particularly curious to check out exactly how each carrier has implemented the principles set out in the CTIA’s Consumer Code for Wireless Service.

Here’s what the carriers promised:

Each carrier should post clear, concise and accessible policies for how they’ll handle unlocking postpaid and prepaid devices.

Postpaid customer’s phones should be unlocked by carriers for:

Prepaid phones should be unlocked no later than one year after initial activation, as long as “reasonable time, payment or usage requirements” are met.

Carriers should notify customers that their devices are eligible for unlocking or automatically unlock users’ devices once they’re eligible for a free unlock. For prepaid customers, that notice can occur at the point of sale or via a notice on the website.

Carriers should unlock devices within two days of receiving a request, or at least send a request to the OEM within two days, or explain why the device can’t be unlocked or they might need more time.

Carriers should unlock devices for deployed military personnel who are customers in good standing, as long as they show deployment papers.

The most significant missing component from the “Consumer Code” is a commitment from carriers to accept unlocked devices on their networks.

Interoperability is an obvious and critical piece of what makes unlocking valuable. If you unlock your phone, you need to be able to take it to another carrier and use it. Sure, in some cases, the technologies differ (for example CDMA vs GSM), but with the rollout of LTE and modern smartphones with mutli-band, multi-technology support, including the iPhone, that’s a decreasingly common barrier.

But many carriers, most notably Sprint, specifically says that it won’t activate phones that were originally sold by another carrier. That’s despite the cellular technologies the phones use being entirely standardized.

In Sprint’s case, those restrictions even apply to Virgin Mobile devices, which run entirely on Sprint’s network. Even if Virgin Mobile unlocks your phone for you, Sprint won’t activate it for use on a prepaid or postpaid account. It’s patently absurd: There’s simply no good reason to prevent users from bringing their own devices—in fact, it makes it even harder for consumers to switch to your carrier. The only justification for that kind of policy is to gouge customers and force them to buy more expensive, “carrier-approved” devices that come with 2-year contracts.

Verizon is the only carrier that seems to have realized how ridiculous it is to “lock” consumers’ devices in the first place. It’s largely stopped the practice, though to be fair, the company apparently was required by the FCC to do so when it bought licenses in the 700MHz Block C auction.

But even Verizon doesn’t make interoperability simple. Its Bring Your Own Device program, for instance, makes it clear that your phone needs to be an “unused Verizon phone” to be eligible.

Reforming the DMCA is still critical

It’s worth taking a step back and examining the absurdity of these locks. If you’ve paid for your AT&T phone, committed to a 2-year contract, and agreed to an “early termination fee,” what purpose does a lock really serve? If you’ve paid cash to purchase a prepaid device, why should it come locked to just one carrier?

There’s plenty of evidence that locks serve little real commercial purpose. Verizon’s business hasn’t suffered since it stopped locking its phones. Countries like China and Israel have made locking devices outright illegal with no harm to their wireless industries and plenty of gain for consumers. But unfortunately, it’s unlikely that Congress or the FCC will take action to implement a similar policy here in the U.S.

That’s exactly why the right to unlock and modify electronics is critical. Corporations may be able to sell us locked-down devices, but consumers should at least have the right to take action and circumvent those locks as they see fit.

Unfortunately, a shortsighted and clumsy provision of the DMCA can make it completely illegal for consumers to modify the devices, software and content they purchase.

The DMCA’s anti-circumvention provision was a shortsighted law, written under pressure from the content industry in 1998, ostensibly with the goal of preventing piracy. It includes a problematic legal loophole: It can make it a crime, punishable by 5 years of jail and $500,000 in fines, for circumventing a “technological protection measure,” even if there’s absolutely no copyright infringement.

Courts have tried to strike down that interpretation of the DMCA, but there’s still no clear legal precedent. As a result, the DMCA has been used to threaten software developers, consumers, and security researchers, as well as to harass authors of unlocking software.

Though Congress passed a bill in August of last year to reinstate a temporary exemption to the DMCA for unlocking, that measure will only last until later this year. As it stands, we may well lose our right to unlock our devices without carrier permission when the Librarian of Congress announces the results of the rulemaking in a few months time.

There’s a simple and easy fix to all this. Congress could pass a bill clearly stating that it’s not illegal to circumvent a lock as long as there’s no intention of copyright infringement. That’s exactly what the Unlocking Technology Act would have achieved if it were passed back in 2013. But as is often the case in Congress, the bill was stalled due to opposition from special interests.

It remains to be seen whether Rep. Bob Goodlatte (R-Va.), the chair of the House Judiciary Committee, will include anti-circumvention reform in his current review of U.S. copyright laws. If you’ve made it this far, take a moment and tweet at him to ask him to take action and protect your right to remix and repair.

How we scored the carriers

We studied each unlocking policy to check how it compared with the CTIA’s Consumer Code. Here’s our full rundown:

Verizon doesn’t lock any of its 4G LTE or 3G devices, other than its “Phone-in-the-Box” devices, which are trivially unlockable with either the code “000000” or “123456.” So we automatically gave them credit for all the other categories. Again, it was apparently required to do this.

An earlier version of this post originally appeared at repeaterstore.com.

Photo via EvelynGiggles/Flickr (CC BY 2.0) | Remix by Fernando Alfonso III