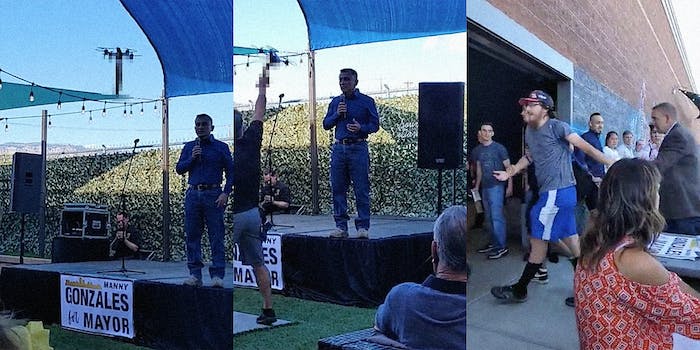 The sex toy first makes its appearance at around 27:20 on the Facebook Live recording while Gonzales, who is currently sheriff of Bernalillo County, was in the middle of addressing the crowd. As one woman asked “Is that a dong on a drone?” the drone slowly flew over to Gonzales, weaving and bobbing to make the toy jiggle and wave in front of the crowd.

This led to members of the security team joining the skirmish, eventually wrestling the pilot to the ground. Gonzales then asked the pilot to leave and Undersheriff Sid Covington escorted him out.

The pilot has been identified as Kaelan Ashby Dreyer and, due to allegedly throwing a punch at Gonzales during the struggle, is being charged with petty misdemeanor battery as well as misdemeanor resisting, evading, or obstructing an officer as he allegedly attempted to run away when Covington attempted to arrest him outside the venue. Dreyer maintains he struck Gonzales by accident and that he intended only to shake his fist at him because he didn’t like the “disrespectful way” Gonzales responded to the audience member carrying a sign when she asked Gonzales a question.

Gonzales went on to accuse his rival candidate, incumbent Mayor Tim Keller, of “possibly” being behind the incident. Keller’s campaign has denounced the accusations as free from “facts or evidence,” with Keller’s campaign manager Neri Holguin adding that “as a law enforcement leader, that reflects poorly on him.”

Gonzales maintains that whether or not Keller was behind it, the incident “was a coordinated effort, very intentional,” carried out by “political operatives” who were “planted” in his audience in order to disrupt his rally.

Though there’s no evidence the audience members carrying signs emblazoned with statements like “too many bad cops” or “the unhoused need beds” were associated with Dreyer, it appears Gonzales believes they were.

Meanwhile, Dreyer told the Albuquerque Journal that “Manny Gonzales is trying to associate me with Tim Keller or radical leftist behavior. I’m not a fan of Tim Keller either and identify as libertarian.”