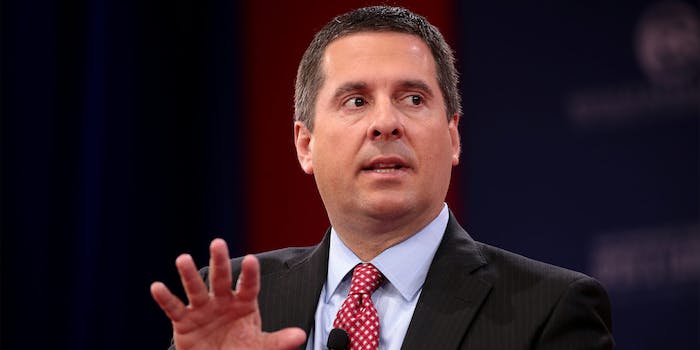 He was secretly recorded.

Rep. Devin Nunes (R-Calif.), no stranger to recent political gaffes, a  has a secret master plan to save President Donald Trump from the nefarious forces lurking in the nether reaches of government.

And to implement it, this world-class congressional operator has kept it far from the view of the public. Until, naturally, it leaked late Wednesday. Nunes was secretly recorded while detailing his timeline to impeach Deputy Attorney General Rod Rosenstein because of course, he was.

Rachel Madow, of MSNBC, obtained the recording of Nunes at a fundraiser for Rep. Cathy McMorris Rodgers (R-Wash.) in her home state. In it, Nunes discusses how House Republicans still want to impeach Rosenstein—despite assurances from the leadership that that wasn’t a priority— but are only waiting to do so until after the Senate confirms Trump’s Supreme Court pick, Brett Kavanaugh.

Nunes, along with Rep. Jim Jordan (R-Ohio), introduced articles of impeachment against Rosenstein last week. Speaker of the House Paul Ryan dismissed the idea. That’s because they need to shape the long-term future of the judiciary and secure the House and Senate in 2018 before they take down the deep state, according to Nunes at least.

An impeachment vote, Nunes said, would “tie the Senate into knots.”

“The Senate would have to drop everything they’re doing … and start with impeachment on Rosenstein. And then take the risk of not getting Kavanaugh confirmed,” Nunes added. “So it’s not a matter that any of us like Rosenstein. It’s a matter of, it’s a matter of timing.”

Nunes also noted that while he supports impeaching Rosenstein, he knows it would be unpopular, and can’t do that until after the election: “I’ve said publicly Rosenstein deserves to be impeached… the question is the timing of it right before the election.”

Interestingly, while Nunes has lobbied for the Russia investigation to end, at the fundraiser he said getting stolen emails for use in a campaign would be a crime. The same things Trump has been accused of. But he somehow still wants the investigation into Trump to end.

Nunes concludes by saying Republicans need to keep their majority in Congress to protect the president.

So there you have it. Get a judge, win the midterms, then fire Rosenstein for investigating something he considers a crime.

You heard it from the man himself.