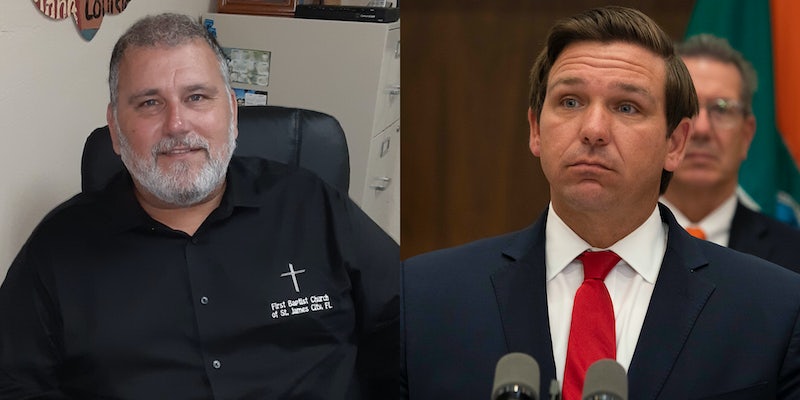 The pastor also thinks Catholics like DeSantis pray to a false idol.

Florida Gov. Ron DeSantis (R) is under fire for featuring a Baptist preacher with a history of making antisemitic comments in a campaign ad.

Many are criticizing DeSantis for including Jinks in the ad because of the pastor’s history of making inflammatory remarks about other faiths.

“It’s a shame that the Jews, who should know better, reject their own Messiah (who fulfilled every one of their prophecies) still believe that they need sacrifices and the Temple to sacrifice them in,” Jinks commented on his Facebook post linking to an article in the Jerusalem Post.

In subsequent comments, Jinks criticized the Pope for urging unity between Jews, Muslims, and Christians.

“It seems like there’s a plan among world leaders to push this ‘Unity,'” he wrote. “Which is just the opposite of what Jesus taught and what Christians are supposed to do. We are called to be at odds with any religion that does not acknowledge Jesus as the Prince of Peace and the only way to the Father.”

Jinks subsequently wondered “how long it will take for me to be in Facebook jail over these comments?!”

A local media outlet reports that the DeSantis campaign asked Jinks to appear in the ad, which began airing nationwide earlier this month.

Jinks’ comments set off a firestorm of criticisms.

Forward described him as a “Christian nationalist pastor with antisemitic views.”

“So while it may be shocking, it isn’t surprising that he would spend millions of dollars in advertising to elevate an antisemite with a history of hateful speech.”

DeSantis has strong support from extremists.

In subsequent comments, Jinks described praying to Mary as the “sin” of idolatry. Catholics often direct their prayers to Mary. DeSantis is a practicing Catholic.