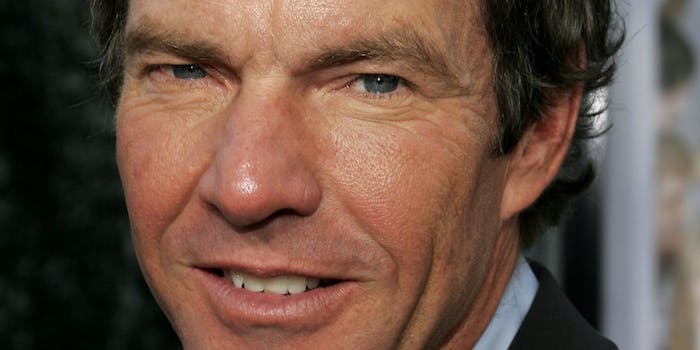 Why was Dennis Quaid hanging with 2 Capitol rioters at a right-wing gala?

Quaid was speaking at the FLAG gala.

Hollywood star Dennis Quaid posed for photos with two Capitol insurrectionists at a right-wing party, according to photos posted on the Instagram page @homegrownterrorists.

The page monitors and highlights the activities of known Capitol insurrectionists.

Male model John Strand, charged with disorderly conduct and violent entry in the Capitol probe, posted the exact same photo on the Twitter account named in his indictment.

The picture comes from the FLAG Gala, an event organized by the Foundation For Liberty And American Greatness (FLAG). FLAG is a non-profit whose stated purpose is “providing high-quality civics education that informs students and families about the greatness of America.”

Quaid was a keynote speaker at the event. Though in 2018 he told the New York Post he was a “registered independent,” he has since seemed to pivot to the right. He lent his time and talents to an ad campaign for former President Donald Trump, a documentary for right-wing radio host Dennis Prager, and recently appeared at the “Freedom Fest” conference with South Dakota Republican Governor Kristi Noem.

FLAG was founded by Nick Adams, who earned notoriety as the Deputy Mayor of Sydney, Australia for suggesting that killing all pigeons could stop the spread of bird flu.

Other speakers at the gala included singer Mary Millben and Adams himself.

Indictments filed by the United States Department of Justice on Feb. 5 charged both Strand and Gold with five offenses related to the Capitol insurrection. Gold was flagged by Twitter users after the FBI called for help identifying her.

A representative for Mr. Quaid, Scott Adkins, said in a statement that “Mr. Quaid did not know who these people were when the photograph was taken.”

FLAG did not respond to requests for comment from the Daily Dot.

Dennis Quaid’s acting career has included starring roles in The Right Stuff, Far From Heaven, and The Rookie.