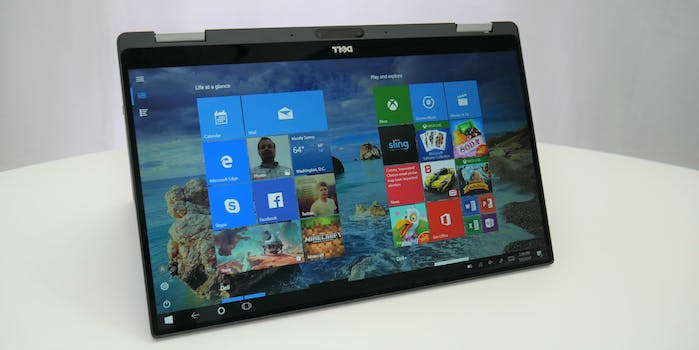 Review: Is the Dell XPS 13 2-in-1 the best convertible laptop around?

The Dell XPS 13 2-in-1 brings tablet mode to one of the strongest laptop lines of the past few years. Its non-convertible counterparts, the flagship XPS 13 and XPS 15, are widely considered some of the best portable laptops on the market for their InfinityEdge display, strong battery life, and durable, lightweight chassis.

But the new 2-in-1 isn’t just an XPS 13 with a fancy hinge that allows its screen to fold back 360-degrees. It’s a device with a unique design and new set of internals created to maximize portability and bring out the best of Windows 10’s tablet functionality.

Here’s everything you could want to know about Dell’s XPS 13 2-in-1—and whether it’s worth investing in.

I’m pleased to report the XPS 13 2-in-1 feels every bit as high-end as its $1,000+ price would suggest. The lid and base are covered in a thick slab of machined-aluminum, while the inside is coated in a soft-touch carbon fiber that keeps your palms cool without feeling uninviting. The new aluminum-wrapped steel hinges feel reassuringly stiff and kept the display upright as I tapped through Windows 10 OS in standard laptop mode.

The device is extremely compact, especially given its screen size (Dell says it has the frame of an 11-inch laptop), and weighs in at a fairly light 2.7 pounds (still heavy for a tablet). That’s a good deal less than the three-pound MacBook Pro and even lighter than the Razor Blade Stealth and non-convertible XPS 13. The laptop is also only .54 inches thin when closed, making it slightly thinner than the MacBook Pro.

I do have a few minor gripes with the construction of the XPS 13 2-in-1. The placement of the webcams is terrible (more on that later), and the soft touch material used on the inside is extremely sensitive to fingerprints. Also, the battery life indicator button on the left side of the device and the power button on the right side are incredibly difficult to press and might make you frustrated enough to want to really test out the durability of the machine—Office Space-style.

Despite those qualms, I have to commend Dell for creating a laptop that feels so well engineered you’ll want to show off to friends—even those with Apple computers.

The 13-inch 1080p display found on our XPS 2-in-1 screen is a real stunner thanks in part to the InfinityEdge feature and its tiny .2-inch-wide bezels, which makes the screen appear as though it is floating in thin air. If some of those phrases sound familiar, it’s because companies like Lenovo, LG, and Samsung are just now touting similar features in their recently announced smartphones and laptops. I could go on about the visual effect gained by the edge-to-edge display, but best you have a look yourself.

Colors appeared vivid and accurate on the XPS when flipping through movie trailers on YouTube. In fact, my eyes were immediately drawn to the richness of the screen every time I lifted the lid, something I wasn’t expecting out of the 1080p panel. I also didn’t have any issues reading even the smallest text, despite what some may consider a disappointing resolution at the $1,000 price point. That’s not to say I wasn’t hoping to feast my eyes on the optional QHD panel, but that is a $300 upgrade that doesn’t seem necessary given the quality of the FHD model. If I have one gripe, it’s that white balance out of the box was a bit warm, though that can always be adjusted in the settings.

The XPS 13 2-in-1 doesn’t reach exceptional brightness levels, but at 300 nits, it’s just bright enough to offset its extremely glossy screen on a sunny day. That doesn’t compare favorably to the 500 nits found on the MacBook Pro, but very few laptops do.

One of the biggest difference between the 2-in-1 and traditional XPS 13 is the new Y-series processor. It’s a downgrade in performance to the U-series chips you’ll find on most other flagship ultrabooks, but don’t let that dissuade you. The Intel Core i7-7Y75 processor, 8GB of RAM, and 256G SSD in my review unit handled everyday tasks with ease. That consists of uploading photos and videos, flipping through no less than 10 browser tabs at any time, and playing jams on YouTube and Google Music.

This is Dell’s first introduction to Dynamic Power Mode, which sends a jolt of power to your processor for an added performance boost when needed. It’s a nice addition that helps offset some of the performance loss from the Y-series processor, but I still recommend purchasing a device with an Intel U or HQ-series processor if you’re one of those “creators” Microsoft keeps talking about.

Gamers beware: The XPS 13 2-in-1 is not the laptop for you. Its integrated Intel 640 graphics will do just fine for web applications but won’t put you past the 30 frames-per-second threshold for most new PC games. Look to the XPS 15 with its dedicated GPU if you’ve already settled on Dell.

Dell says to expect 8.5 hours of battery life when running apps like Word or Excel, and just over seven if you plan on streaming Netflix. Those estimates seem pretty accurate when compared to my own tests. I was consistently getting between six and eight hours of battery life with normal use and the screen at 80 percent brightness. That’s a decent result but somewhat disappointing considering the non-2-in-1 version and other convertible rivals like the Lenovo Yoga 910 last several hours longer.

Dell decided to go with a smaller 46-watt battery instead of the original XPS 13’s 60-watt. I would have sacrificed some portability for those extra few hours of run time, but at least there is the option to use Dell’s portable Power Companion charger when you’re on the go.

The XPS 13 2-in-1 has a respectable port selection for a device its size, but there are some notable trade-offs. On the left side, you will find a Thunderbolt 3 USB-C port used for charging the laptop (take that Microsoft), a headphone jack, and five tiny circular lights that act as a battery life indicator.

The right side sports a standard USB-C port and micro-SD card slot.

That means no full-sized SD card for photographers and no full-sized USB-A slot for legacy devices. Dell does include a USB-A to USB-C adapter in the box to try and make up for the omission.

Dell made some smart compromises to craft a keyboard that feels fast and comfortable, despite the device’s compact frame. While key travel is expectedly short, presses feel heavy and are met with a pleasant “click.”

I scored 93 word-per-minute with a 93 percent accuracy using 10fastfinger.com. I tried again after getting used to the keyboard a bit more and reached 109 wpm at 94 percent accuracy, which is right up there with some of my highest results.

Webcam quality is something most Windows PC manufacturers have struggled with for years, but it isn’t resolution that hurts the XPS 13 2-in-1’s scores—it’s composition.

You will notice the XPS 13 2-in-1’s video camera is positioned underneath the display. This forces you to tilt the screen back quite a bit to get your face framed within the shot. Once you’ve done that, the folks on the other end of your video call will see a lovely image of the inside of your nostrils and the underbelly of your chin.  Oh, and it will also look like you’re staring out in the distance every time you look at your screen. But don’t worry, your boss on the other end will know you’re not daydreaming because your hands will cover the shot every time you type. The tiny bezels may also cause problems with certain external webcam solutions.

It’s not all bad. The 720p video camera takes decent quality footage, and unlike the original XPS 13, you can at least put the 2-in-1 in tent mode for a more natural shot (though you’ll lose the keyboard). There is also a second infrared camera under the display that Dell says will be enabled as an alternative login method.

Speaking of logging in, the XPS 13 2-in-1 comes with a fingerprint sensor that lets you sign in using Microsoft Hello. Thankfully, it’s less like those swipe sensors found on old laptops and more like what you’d see on current flagship smartphones.

The speakers on the XPS 13 2-in-1 get surprisingly loud for a device this size. Vocals come in crisp and clear but ultimately feel more distant and hollow than intimate. I found that high notes in folk music, like the strumming of a guitar, come in a bit shrill and thin. While the midrange is mostly agreeable, bass response is predictably lacking with low notes sounding a dull thud rather than a refined rumble.

It’s a valiant effort from Dell, but not enough to change my advice of buying a good pair of speakers or headphones to complement your laptop.

The XPS has one of the best touchpads I’ve used on a Windows machine. It has a pleasant soft-touch surface and smooth response. I had no issues preforming gestures like pinch to zoom and swiping up with three fingers to see all open windows.

So, should you buy it?

I wholeheartedly recommend the XPS 13 2-in-1 to anyone looking for a portable laptop that can also be used as a tablet. It has a lot to offer, and it’s a solid value even at its $1,000 price tag. It’s small, lightweight, and the standard FHD display looks fantastic with its edge-to-edge border. Performance is solid, despite a weaker processor, and the addition of a fingerprint sensor and infrared camera add an extra layer of convenience and security.

That being said, there are still some areas for improvement. The webcam placement just doesn’t work, and the power and battery life indicator buttons are a chore to press. The sound quality of the speakers could also be improved, and battery life, while good, is less than exceptional. You’ll also have to carry around the included USB-C to USB-A dongle to charge all but the newest tech.

All-in-all, the XPS 13 2-in-1 is an excellent option for anyone wanting a high-end convertible ultrabook for day-to-day use. Those who won’t use tablet mode, require peak performance, or plan on gaming, should look elsewhere.