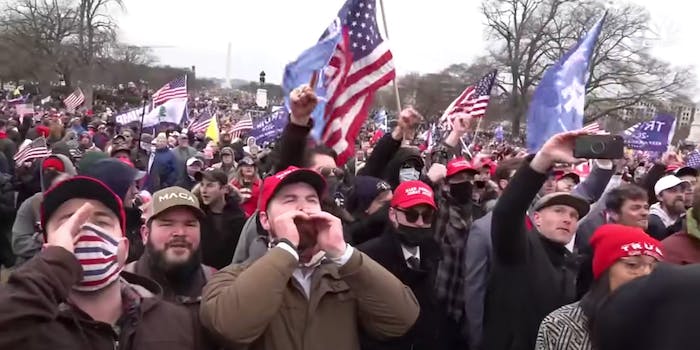 'We’re holding these insurrectionists accountable for conspiring to terrorize the District...'

District of Columbia Attorney General Karl Racine has announced a civil lawsuit against the Proud Boys and Oath Keepers over the two groups’ involvement in the Jan. 6 Capitol riot.

In a statement on Twitter, Racine accused the far-right organizations of causing “extensive damage to the District” while attempting to overturn the 2020 presidential election.

“BREAKING: I’m suing the Proud Boys and the Oath Keepers, the first civil lawsuit by a government entity against the Jan. 6 insurrectionists,” Racine said. “They caused extensive damage to the District, our democracy, and particularly the brave men and women of our Metropolitan Police Department.”

The lawsuit, which specifically names 31 individual members from both groups, alleges that the accused conspired “to terrorize the District by planning, promoting, and participating” in the violent events that took place on January 6.

In further comments on Twitter, Racine stated that he would be “seeking damages in this case and will keep working to ensure such an assault never happens again.”

Racine also cites in the lawsuit the cost associated not only with the damages caused by the riot but the “unprecedented” deployment of police resources as well.

“While the costs to the District are still being investigated and tallied, the District has preliminarily estimated that MPD incurred millions of dollars in costs during the week of January 6th alone,” the suit adds.

The riot, which was spurred on by debunked conspiracy theories alleging widespread voter fraud, resulted in injuries to 138 police officers. An additional four officers would take their own lives in the ensuing months.

The lawsuit is suing the two groups under the Ku Klux Klan Act of 1871, a federal law aimed at protecting civil rights and defending against “vigilantes and insurrectionists.”

In a statement to the Washington Post, Racine, who is seeking “full restitution and recompense,” described the damages caused by both groups as “substantial.”

“If it so happens that it bankrupts or puts these individuals and entities in financial peril, so be it,” he said.