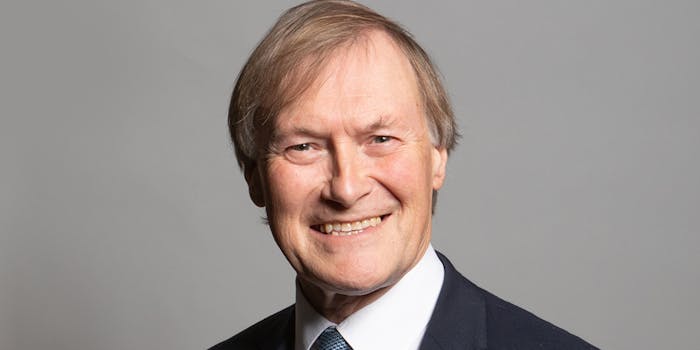 Freedom of speech, online anonymity, concerns raised as ‘David’s Law’ gets pushed in the U.K.

Opponents call it an opportunistic attempt to further limit freedom of speech.

In the wake of the murder of British Conservative MP David Amess, members of the Conservative party are calling for “David’s Law,” which would place further limits and penalties on anonymous or “harmful” social media use as laid out in the Online Safety Bill.

Amess was stabbed to death late last week while holding a meeting with constituents in Leigh-on-Sea, Essex. The police have categorized it as a terrorist incident, with no connection to social media yet being made.

A draft of the Online Safety Bill was made public in May, and was immediately criticized for its potential to harm freedom of expression. As the Electronic Frontier Foundation (EFF) points out, it would place a “duty of care” on online platforms and require them to take down numerous forms of content, including what “the government has deemed lawful but ‘harmful.'”

Before his death Amess was concerned about the misogynistic threats and harassment female MP’s were subject to online. According to his friend, mentee and fellow Tory MP Mark Francois.

This alleged impulse is being used as part of the justification behind Francois’ push furthering the Online Harms Bill with “David’s Law,” along with an attempt to link anonymous criticism and abuse on social media to the man’s death.

“I suggest that if we want to ensure that our colleague didn’t die in vain, we collectively all of us pick up the baton, regardless of our party and take the forthcoming Online Harms Bill and toughen it up markedly,” Francois said, according to the Guardian. “Let’s put, if I may be so presumptuous, David’s law on to the statute book, the essence of which would be that while people in public life must remain open to legitimate criticism, they can no longer be vilified or their families subject to the most horrendous abuse, especially from people who hide behind a cloak of anonymity with the connivance of the social media companies for profit.”

However, the alleged vilification of Tories on social media—something Conservative party members have been framing as a serious problem for a while now—appears to have had no bearing on Amess’ murder.

Instead, people from both sides of the aisle have been calling “David’s Law” out as a cynical ploy to weaponize Amess’ death and push even further legislation that anti-censorship watchdogs are already calling a “kafkaesque“, “entrenchment of surveillance capitalism” and a serious threat to freedom of speech.

Many recalled the murder of Labour MP Jo Cox in 2016, whose killer was a white supremacist motivated by her opposition to Brexit. Prosecutors acknowledged the “febrile atmosphere,” which included extremely inflammatory remarks made online about those who stood in opposition to it, contributed to her death.

But there was no call to ban or restrict “vilification” of political figures then, on social media or otherwise, despite the over 50,000 tweets celebrating her death as a “traitor.”

In fact, the request by concerned MP Paula Sheriff that the prime minister and other political figures refrain from using words like “traitor,” “betrayal,” and “surrender” to describe opposition to Brexit in order to avoid further inflaming an already dangerous situation was met with “such humbug.”

That discrepancy—not acting when Cox was murdered and online vitriol was a factor, but instead rushing to act now, without any evidence social media was a factor—has generated a lot of criticism online.

There’s also considerable fear that this bill won’t just regulate actual harassment but will be used to silence expressions of anger and legitimate criticism of the government.

The criticisms were harsh especially in light of the proposed reforms to the Official Secrets Act that would see journalists criminalized for whistleblowing or publishing leaked materials that “embarrass” the government, equating their actions with espionage by foreign powers.

Concerns about “David’s Law” have also been raised regarding freedom of speech generally and how a ban on anonymous social media accounts will only harm the most vulnerable members of society.

Marginalized people trying to avoid doxing and harassment, people fleeing domestic violence and stalking, as well as people who—for professional reasons—can’t have a public social media profile, will all either have to withdraw from one of the primary sources for news, connection, and aid, or face the potentially violent or career ending consequences.