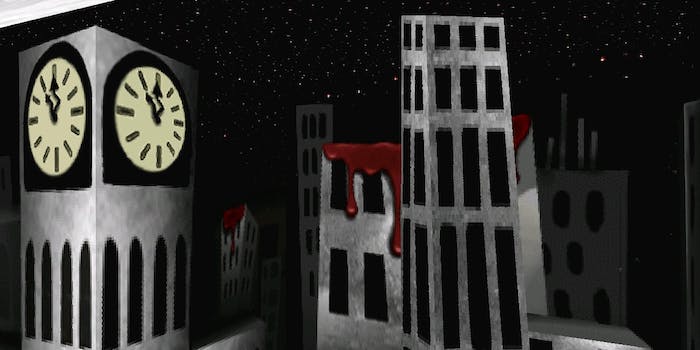 Inside David Bowie’s insane, disturbing virtual world from 1998 that some fans never left

David Bowie has left us, but his BowieWorld lives on.

This morning the world discovered that we had lost legendary musician and entertainment icon David Bowie to cancer at the age of 69. While his contributions to the music and film worlds cannot be overstated, he also had a better grasp than most on just how the Internet would impact our lives and culture, even going so far as to set up his very own Internet service provider in the late 1990s.

He called it BowieNet, but its existence is really only half the story. 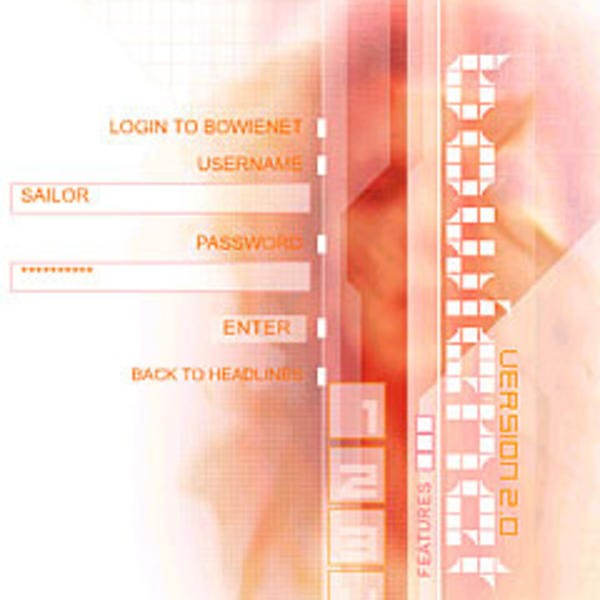 The year was 1998, and AOL trial CDs were filling mailboxes from coast to coast. Connecting to the Internet meant sitting through a chorus of dial-up tones and disabling one of your phone lines in the process. Between Yahoo chat rooms, the early rumbles of Y2K, and Will Smith’s “Gettin’ Jiggy Wit It,” a pop star wanting to run his own ISP didn’t seem all that strange.

At the stroke of midnight on Sept. 1, 1998, BowieNet powered up. The press release, which declared the start of the service as an “all-out cyberspace celebration,” made some unbelievably bold promises for the time, including “webcast performances” by popular artists, live video feeds of David Bowie’s studio, as well as video interviews. 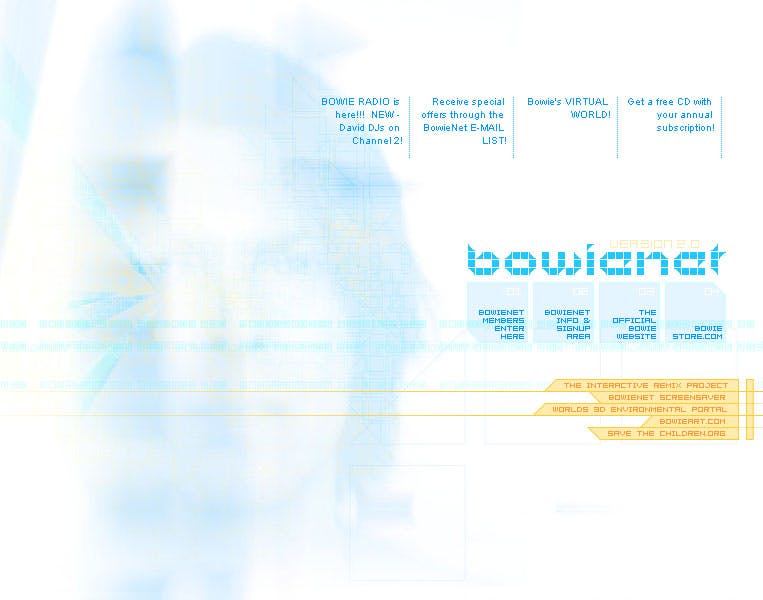 “I wanted to create an environment where not just my fans, but all music fans could be part of a single community where vast archives of music and information could be accessed, views stated and ideas exchanged,” Bowie himself commented at the time of the service’s launch.

“I wanted to create an environment where not just my fans, but all music fans could be part of a single community where vast archives of music and information could be accessed, views stated and ideas exchanged.”

BowieNet’s plan to offer worldwide Internet access included a few special perks for subscribers including personal homepages—with 20MB of storage—and [email protected] email handles. Users even had a once-in-a-lifetime shot to contribute to one of the artist’s songs via a songwriting competition and the opportunity to contribute to the album artwork for one of Bowie’s concert recordings.

Perhaps more intriguing than BowieNet itself is a 3D chat client that was launched alongside it. Called BowieWorld, it launched a solid half decade ahead of Second Life and is built on the “Worlds” virtual community platform.

Today, more than a decade and a half later, it remains up and running. I decided to take a look around.

BowieWorld appears to have remained perfectly preserved from its state in the late 1990s. Navigating the world, which is entirely 3D, is done via the arrow keys, and your personal avatar has a strange momentum that can make you a bit dizzy and nauseous if you’re not careful. 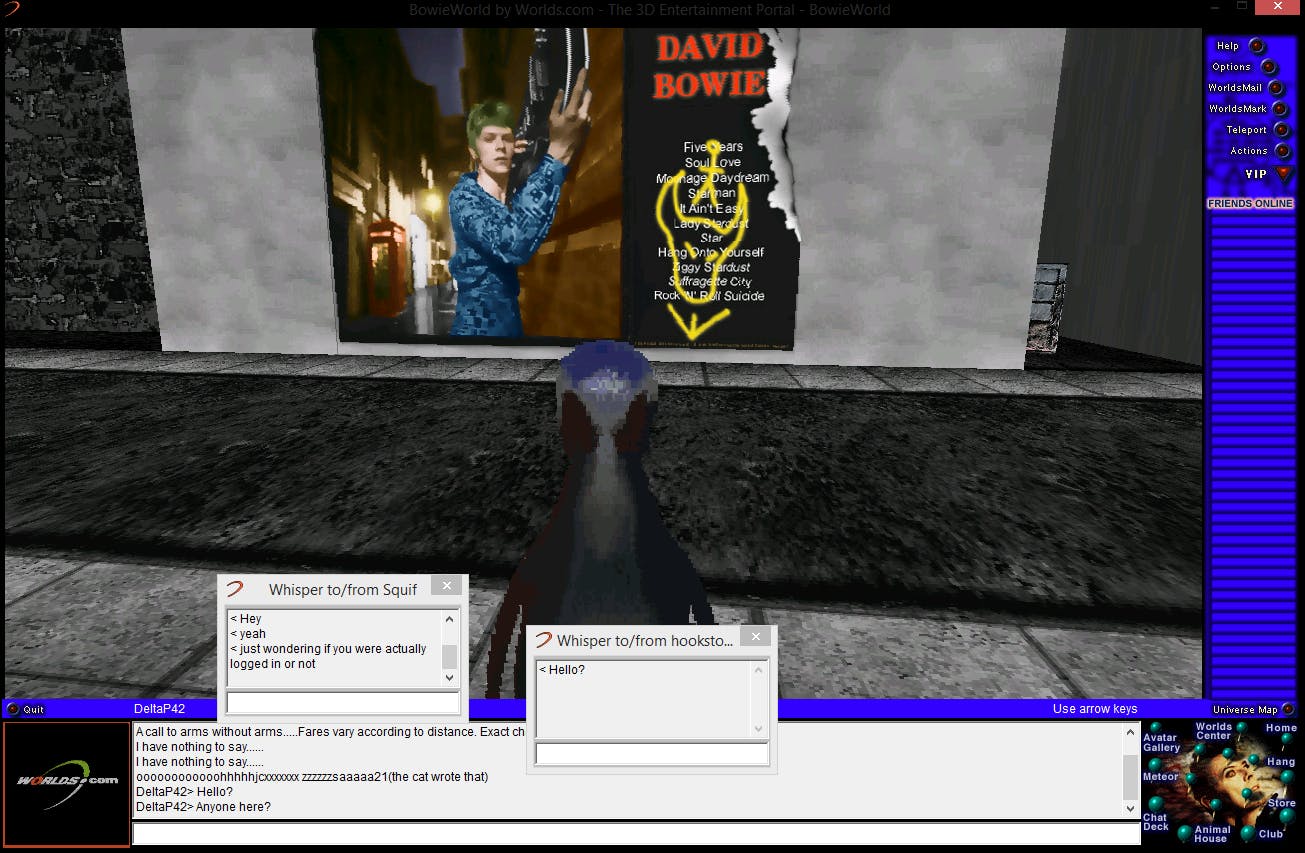 There’s not a whole lot to do in BowieWorld, but there are a few interesting areas to explore. There’s a street maze, a “penthouse,” and something called the “roof garden,” which is filled with severed hands that fly skyward when clicked.

But even more surprising than the odd, oftentimes disturbing imagery—the office buildings are gushing blood, just in case you were wondering—is the fact that there are still Bowie fans hanging out there.

I ran into at least a half dozen users with fully fleshed-out profiles, complete with lists of interests, favorite quotes, and hobbies. Most were equipped with premium avatars, indicating that they pay a monthly fee for the privilege of customizing their appearance.

There’s even a store, filled with virtual Bowie merchandise. 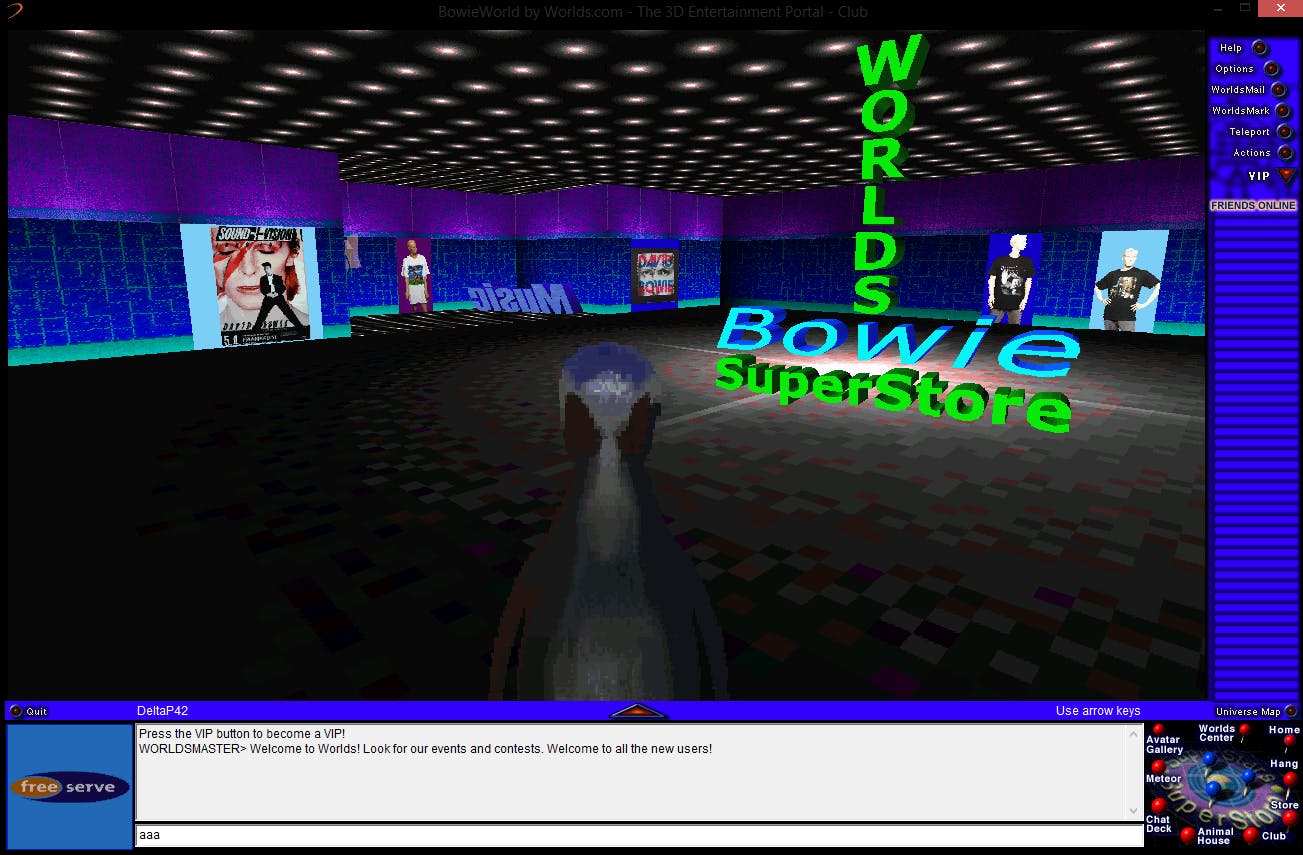 Whatever you do, don’t venture into the “Chaos” room. It’s not particularly crowded, but it’s probably the most unsettling of all the virtual venues in BowieWorld.

I shared my condolences with those who I ran into, most of whom were very welcoming, though few of them had a solid reason for why they’ve remained in the Bowie’s digital space for so long.

The most fitting answer to that question came from a person who had chosen to appear in the world as a chess piece. I asked them why they had continued to log into a virtual world that had fallen into the past, to which they replied: “Why not?”