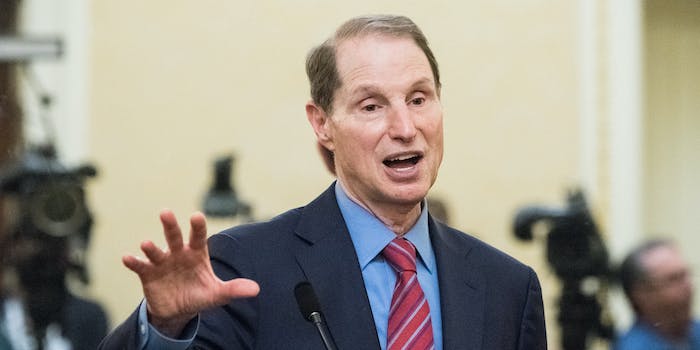 'We need a data privacy law in the United States, and we need it now.'

Sen. Ron Wyden (D-Ore.) and a coalition of civil rights, internet rights, and public interest groups said on Tuesday it is urgent that Congress gets its act together and passes data privacy legislation.

The groups—led by Fight for the Future, Access Now, Open Media, and Public Citizen—launched a petition earlier this year in the wake of the testimony from Frances Haugen, a Facebook whistleblower. The petition allowed for people to urge Congress to pass legislation, arguing that it would be “a clear step that you can take right now to stop Facebook from causing more harm, and to make all social media and the internet a better, safer place that enhances our democracy and where our rights are protected.”

Specifically, the petition called for a law that regulated algorithmic manipulation. Overall, more than 24,000 people signed the petition, the groups said.

“We need a data privacy law in the United States, and we need it now,” Willmary Escoto, a U.S. policy analyst at Access Now, said during a press conference. “Our data is harvested and weaponized against us, fueling algorithmic discrimination against the most marginalized communities and violating our right to privacy. People are fed up, and the tens of thousands of petition signatures urging Congress to pass a data protection law are a rallying cry for action.”

On Tuesday, Wyden accepted the petitions and called the push an “important fight to take on at the start of the new year.” The senator also said the Capitol riot last year put a “hot light” on Facebook’s “predatory use and abuse of American’s personal information.”

“It put a magnifying glass on how Facebook is willing to coddle white nationalists, scammers, and anti-democratic right-wing figures for Mark Zuckerberg’s personal profit. My view is the root cause of Facebook’s toxic corporate behavior is the business model. It’s the business model that is built on hoovering up private information from everybody in sight and then is based on misusing it for profit. The whole reason it is profitable for Facebook to ignore the blight on its site is because it can harvest vast amounts of personal information without any limits on how it uses or shares that data.”

Matt Hatfield, the campaigns director at Open Media, said that data privacy legislation was “the most important fix” to “defend our democracy and advance our rights.”

Hatfield said that a data privacy law was the right way for the government to tackle misinformation and radicalization online rather than having the government pass “broad rules” banning speech or having platforms that don’t regulate content at all.

The ability for big tech companies to surveil users and use that information to give them a personalized algorithmic loop of content was “lucrative,” Hatfield said, and that helps fuel radicalization and misinformation.

In the past, Congress has gone back and forth with different proposals for a data privacy law, however talks have stalled. After Haugen’s testimony last October before Congress, though, some lawmakers said it could serve as a “catalyst” for legislation.