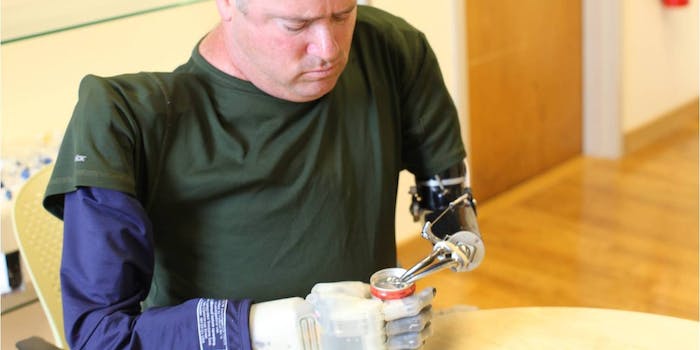 DARPA is developing prosthetic limbs that can ‘feel’

Can an artificial limb feel? The military thinks so.

DARPA isn’t just in the business of building insanely fast robo-cheetahs and direction-changing smart bullets. The Pentagon’s mad-science department is also working on less combat-oriented projects that are no less mind-blowing. Its latest undertaking? Building prosthetic limbs capable of “feeling”—just like the real thing.

Prosthetics have come a long way, but DARPA’s Hand Proprioception and Touch Interfaces (HAPTIX) initiative is a major leap toward normalizing the lives of those who have lost limbs.

Today, even the most sophisticated prosthetics only provide output for the wearer: prosthetic limbs provide no sensory feedback, making them more like a tool than a fully functioning part of the body. The challenge here is huge; the interplay between brain and body that gives rise to the sensation of touch is deeply complex and executed outside of the realm of conscious awareness.

More challenging yet is the fact that, as its name indicates, HAPTIX seeks to develop an artificial system of proprioception—the phenomenon of knowing where one’s body parts are in space in relation to one another and the surrounding world.

HAPTIX will begin by developing a prosthetic hand capable of providing a new kind of sensory feedback, one “so rich and vibrant that users would want to wear their prostheses full time.” Such a system could potentially resolve the phantom pains that amputees experience as their nervous systems grapple with the sensation of a lost limb.

Contracts for the first phase of the HAPTIX initiative are already underway. Naturally, DARPA’s goals are oriented toward wounded veterans, but the program’s advancements could benefit civilian prosthetics technology as well. HAPTIX will build on DARPA’s existing Revolutionizing Prosthetics research, which has created modular upper-limb prosthetics that offer better dexterity and range of motion than existing models.

The HAPTIX project also builds on existing commercial medical developments like intramuscular electrodes, cardiac pacemaker leads, and nerve-cuff electrodes, along with other devices in the works at NIH and the Department of Veterans Affairs.