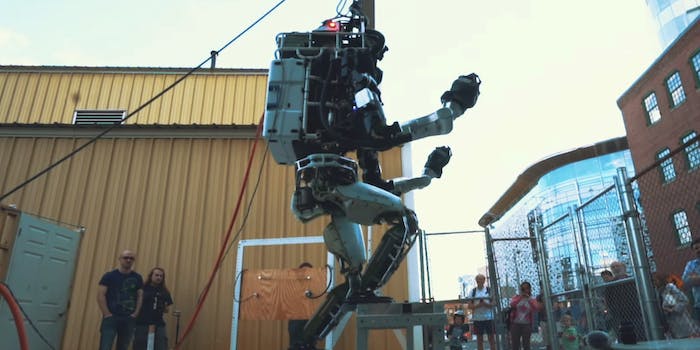 Photo via MIT School of Engineering/YouTube

These giant, humanoid robots may one day save your life

Robots are taking over Los Angeles this week—not for a Hollywood movie, but for the DARPA Robotics Challenge, a competition that brings together the top scientists and engineers in the world.

The June 5-6 event, sponsored by the U.S. government’s Defense Advanced Research Projects Agency (DARPA), is supposed to prompt leading roboticists to figure out how robots can better assist us in times of crisis. When natural and man-made disasters strike, human first responders often can’t safely check for survivors or assess damage because of lingering environmental concerns. That’s where robots come in.

Twenty-five robots will take on eight different tasks in this year’s DARPA challenge, from opening and closing doors to driving a vehicle to turning valves and climbing stairs. There’s also a surprise task that engineers don’t learn in advance and that changes every day.

The winning robot will receive $2 million, the runner-up will get $1 million, and the third-place finisher will get $500,000. For those of you who want to glimpse the future, DARPA is livestreaming all of the contests.

To score first place, robots won’t just need to complete physical tasks. DARPA is also testing how well each robot was designed and built. Teams must be able to communicate with their projects over degraded communications, simulating what a robot and its operators might encounter during a disaster.

The lineup of human-like robots is both awe-inspiring and mildly frightening. These robots can balance and self-correct when pushed, hold objects with surprising dexterity, move heavy rubble, and navigate through disaster landscapes.

The Massachusetts Institute of Technology’s entry, Helios (Atlas), is over six feet tall. It was a huge undertaking: the university has had between 12 and 20 students working on the project at a time.

NASA’s entry, Robosimian, is more spider-like than humanoid. NASA’s Jet Propulsion Laboratory built a robot with four limbs, each of which has 28 actuators—or motors—that control its movement. Sensors in its wrists and ankles can “feel” the terrain beneath it. Robosimian can also fold itself up into a fairly small and mobile size for easy transport to and from disaster zones.

Virginia Tech students have created ESCHER, which stands for Electric Series Compliant Humanoid for Emergency Response. ESCHER stands just shy of six feet tall and, like other robots in the competition, uses sensors to map out objects and terrain. It can also conduct operations partially independent of human instruction.

These are just three of the robots taking on eight challenges this week. Other contestants include Team THOR, from robotics laboratories in Los Angeles, and Team NEDO-Hydra, from scientists and students at four Tokyo universities.

All the robots competing in the DARPA challenge were developed over multiple years, with scientists, engineers, and students working tirelessly to turn metal and circuitry into a successful rescuing machine. Only a few teams will walk away with prize money this weekend, but all of their creations will significantly improve the study of emergency and disaster response—and the quest to engineer better tools for those situations.

Perhaps after the next hurricane, earthquake, or Fukushima-style nuclear disaster, six-foot-tall robots will be ready to step in and save the day—and, even more importantly, countless lives.

Screengrab via MIT School of Engineering/YouTube