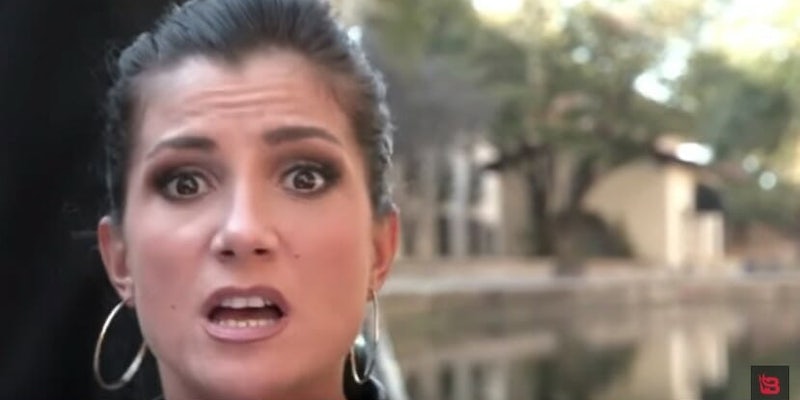 The internet is thrilled to see her go

Right-wing provocateur Dana Loesch is collateral damage in the assassination of NRATV.

On Tuesday, the New York Times reported that the NRA was ceasing operations of NRATV and terminating its relationship with its longtime ad firm Ackerman McQueen (AMc), which produced the channel.

Like the proverbial baby in the bathwater, also out are NRATV talking heads Loesch, potential ZZ Top stunt double Cam Edwards, and Colion “this is definitely a nom de plume” Noir.

The NRA has shut down production of its media arm, NRATV, and severed ties with long-time advertising firm, Ackerman McQueen. On-air personalities, including Dana Loesch—an outspoken critic of Moms Demand Action—will no longer be public faces of the NRA. https://t.co/HOGts8NyAx

In a statement, NRA CEO Wayne LaPierre said that many members had contacted them to express concern that NRATV’s message was getting too far afield of their “core mission: defending the Second Amendment.”

“I am announcing that starting today, we are undergoing a significant change in our communications strategy,” he continued. “We are no longer airing ‘live TV’ programming. Whether and when we return to ‘live’ programming is a subject of ongoing analysis.”

According to the Times, the somewhat stunning turn of events centered on a series of conflicts between AMc and the NRA in recent months. Also contributing to the matter are the NRA’s recent financial and membership troubles.

The NRA has filed two lawsuits against AMc, which has represented it since the 1980s. In the first it accuses AMc of orchestrating an attempted coup of LaPierre and of leaking information designed to “tarnish and ultimately destroy the public image of the NRA and its senior leadership,” the Wall Street Journal reported.

The NRA claims that the coup and attempted smear were designed in part to keep the organization from examining AMc’s accounting practices, which are the subject of a separate suit against the firm accusing it of failing to justify its expenses.

In a statement to the Daily Dot, AMc said that the allegations were “false” and an attempt to “smear” the company. It claims that the NRA is trying to get out of paying millions of dollars for work already performed under their contract.

“The NRA is attempting to avoid the strict financial obligations it undertook when it outsourced its work to Ackerman McQueen,” it states, “They are refusing to pay, in part to harm AMc, but also because the NRA probably is having trouble meeting its financial obligations in large measure due to massive unbudgeted legal costs.”

As of this morning, NRATV.com now redirects to the NRA’s main website.

And no one online feels sorry for the biggest casualty: Loesch.

Loesch first rose to prominence as a Breitbart News editor and radio host. Her bombastic style and willingness to say literally anything that pops into her head helped catapult her to right-wing stardom. Loesch’s bombastic style has continued unabated since she was hired by NRATV in 2017.

Even as she tussled with 2020 Democratic presidential candidates and accused the libs of giving Trump the ‘Al Capone’ treatment, Loesch repeatedly came under fire for on-air hijinks, most memorably that time she put KKK hoods on Thomas the Train, and for using the platform to spew right-wing talking points that have little to do with guns.

The news of her ouster was celebrated across social media. On Loesch’s official Facebook page, people cheekily made comments like, “I would avoid any extravagant purchases considering you just lost your job and all,” and, “Thoughts and prayers for a peaceful retirement!”

Others had fun with the news of Loesch’s ouster.

I love that Dana Loesch started her day by defending companies that supply the Trump concentration camps, and ended it by getting fired. Perfection. Chef’s kiss.

Dana Loesch: “The only way to stop a bad guy with a gun, is a…” pic.twitter.com/UbG9erYti8

One thing is certain: there will be plenty of material for this Friday’s segment of Loesch’s radio show in which she reads “all hate mail and hateful comments on air,” as she kindly reminded people on Facebook this morning.

“I will joyously monetize your hatefulness and turn it into range brass,” she posted.

That’s gonna be a lot of brass.