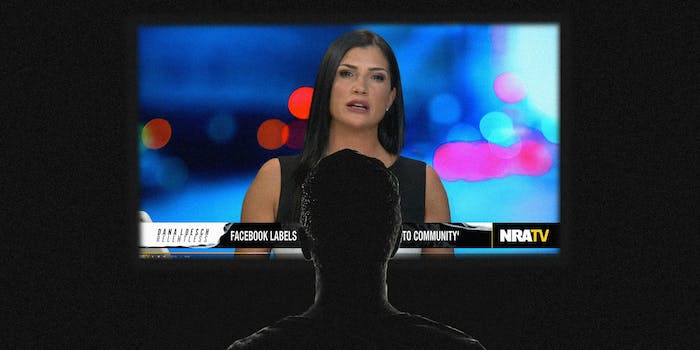 The NRA is delivering its version of the truth.

The National Rifle Association is fighting a losing battle.

In the two months since the devastating Parkland shooting, the NRA has come under so much controversy that pro-gun politicians are helping to pass gun-control legislation and a former Supreme Court justice called for the repeal of the Second Amendment. More so than the Sandy Hook massacre, more so than the Pulse nightclub shooting, more so than the Las Vegas mass slaughter, the NRA is perhaps facing more pressure than ever before in its 147-year history.

But if you think the NRA is cowering away from a fight, you obviously haven’t watched NRA TV on YouTube.

In fact, I’ve spent several hours in the past few weeks watching the NRA’s media outlet online. I’m not a gun person, and I fully support just about every gun control measure that has been proposed. But I wanted to hear what America’s most fervent gun supporters had to say. The NRA says NRA TV is “the Truth. Delivered.” Yeah, about that.

What you find on NRA TV is not surprising. It’s all about the people who love guns, and the analysts who bash people that don’t. NRA TV is a platform that is not hiding from exactly what it wants to be: an antagonistic arena where gun enthusiasts can gather in one place and shout to each other in an echo chamber. Nothing is the NRA’s fault. Everything is a result or a cause of liberal snowflakes who can’t stop crying because the NRA and guns are so very awesome. In the NRA’s eyes, that’s the truth. Delivered.

You can, of course, stream NRATV on its website or you can find it on the Amazon, Google, and Apple streaming platforms. But if you want to get the organization’s most fiery takes in one easy-to-digest place—more bang for your buck, so to speak—YouTube is the place to watch.

It’s where you can enjoy spots like this where liberal snowflakes are mocked.

It’s where you can discover why the Parkland shooting was Barack Obama’s fault.

It’s where the NRA’s most visible spokesperson Dana Loesch can bash Vermont Gov. Phil Scott—who received an A rating from the NRA during his 2016 campaign but raised the organization’s ire by recently signing three gun-related bills—and how he betrayed his constituents.

And where they can savage the so-called fake news media, like CNN’s Jim Acosta.

The clips on the YouTube channel are relatively short and yet filled with vitriol and venom for the NRA’s opponents. And hardly anybody is more vitriolic than Loesch. She’s been accused of inciting a civil war with her viral ads, and she made a flippant Holocaust joke when commenting on President Donald Trump’s feud with CNN. She is unapologetic and fiery and sardonic, and her fans probably love it because she says what they want to be saying. She is the embodiment of that ideology’s id.

But there are plenty of other commentators on the platform who try to top her viciousness.

The site doesn’t list how many people subscribe to the channel—the YouTube analytics site Social Blade counts more than 26,000 subscribers—and even though the account has existed for 11 years, it hasn’t even reached 10 million views as of this writing (the main NRA YouTube channel, for what it’s worth, counts 158,000 subscribers).

The most viral a video had gone in the past month was when Colion Noir, one of the site’s standout stars, interviewed rapper Killer Mike, and they discussed the positive aspects that guns bring to our society. Killer Mike helped bring in 150,000 views for their intelligent conversation. The NRA ran that spot on its YouTube channel a few days before the March For our Lives, and Killer Mike later apologized that the interview was used as a weapon against those who don’t believe in his gun rights views.

Other than that, Noir found 110,000 willing to watch him explain how the media ignored a “hero who stopped [a] school shooting,” while 62,000 people were enticed to listen to him blast Parkland shooting survivor David Hogg’s “white privilege.”

Don’t get me wrong, Noir is intelligent and makes cohesive arguments. But he undercuts the seriousness of his views when he refers to the 17-year-old Hogg as “Malcolm in the Middle.” And it’s a larger theme on the channel where Loesch, Dan Bongino, and others are condescending and snarky when they’re talking about the people they’re bashing.

Still, Noir might be the most popular commentator on NRA TV. In the past, he’s referred to the stereotypical NRA member as OFWG, aka “Old, Fat White Guys,” and he came to prominence on YouTube several years ago where he talked about guns, politics, and pop culture. His real name is Collins Iyare Idehen Jr., and he has more than 670,000 YouTube subscribers. He represents a segment of the population that traditionally votes for Democrats but which has at least some pro-gun viewpoints. He doesn’t mind courting controversy—he recently blasted the Parkland survivors who participated in the March for Our Lives—and he knows that he’s seen by some as the token minority for the NRA.

As he told the Los Angeles Times in 2013, “Some of the most influential Black individuals have advocated for the use of firearms, so how come when I do it, I’m vilified? Take a look at the Black Panthers, MLK, Malcolm X.”

For Noir, this is his truth. Delivered.

Still, the channel hasn’t gained much traction— most videos are in the 500-2,000-view range. Much of the time, the people on the screen aren’t ranting and raving. They’re not foaming at the mouth. They’re not covering the camera in outraged spittle. They’re calm and reasoned. And perhaps that’s why they don’t get many pageviews on YouTube without the help of a celebrity friend or without having to rip a school massacre survivor.

There’s also no attempt to unpack the NRA’s role—or the NRA’s fault—in any of this. After a while, it’s maddening to watch the NRA spin itself around over much of the same points.

So, I checked out some of the NRA’s other options. Like, Love at First Shot, a show (presented by Smith & Wesson) that brings together female gun-lovers, talks to them about what it was like to first discharge a firearm, and how to be fashionable while doing so now. This season, the theme is about concealed carry, and it’s supposed to show a younger, more empowered wing of the NRA.

From the title, it might seem like a reality dating show, but it’s more of a beginner’s guide to the Second Amendment and how and what to shoot. There are perhaps some overdramatic slow-motion shots throughout the show, but it’s well-produced and quickly moves from topic to topic to keep the content fresh.

In case you don’t think this is geared toward women, one episode discusses how, if you use an inside-the-waistband holster for your concealed-carry firearm, you might have to buy a dress or pants that are a size higher than you normally would and how that might be mentally difficult. Or, how an appendix holster might be a better option for mothers so they can move the gun to the center of their waist, allowing them to hold their baby on their hip.

For history buffs, there’s the American Rifleman show, a program that covers the firearm community and those who participate in it. The episode I watched studied the handguns of World War I and later pivoted to a gun review of the Ruger SR-762. For a gun enthusiast, this is probably great content. For somebody who doesn’t agree with the NRA, it’s a welcome break from the caustic commentators.

Clearly, though, NRA TV is trying to recruit a new generation of fans. Which makes perfect sense. It can’t be an organization of OFWGs anymore. That demographic will begin to die out in the next few decades. To stay vibrant, the NRA has to draw younger, more diverse, and more tech-savvy members. NRA TV is probably a good place to start.

NRA TV won’t win over people who are moderate on the issue of guns, and it certainly doesn’t seem to care about those who want gun control. But that’s not the point. It’s an outlet where the so-called truth is delivered.

It just all depends on the kind of truth you’re actually seeking.