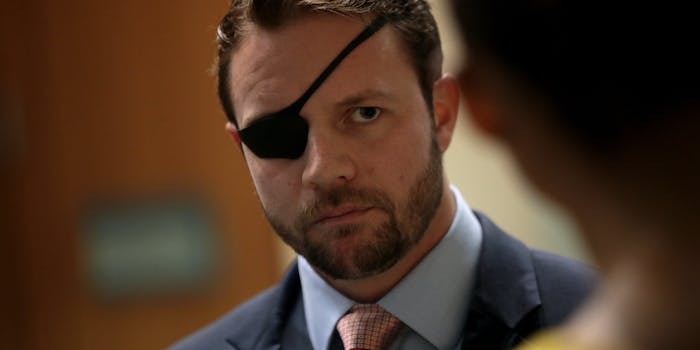 People are trolling Dan Crenshaw through his whistleblower website

'I am having a lot of fun with Dan Crenshaw's whistleblower form.'

Rep. Dan Crenshaw (R-Texas) and Sen. Tom Cotton (R-Ark.) launched a webpage dedicated to whistleblowing with the goal of not letting the U.S. “military fall to woke ideology.” And—perhaps not surprising to anyone—people online are abusing the opportunity to air out their “egregious complaints.”

Crenshaw on Friday tweeted out a link to the page and promised anonymity to “whistleblowers” who submit their stories.

“Your complaint will be legally protected … With written permission we will anonymously publish egregious complaints on social media and tell the country what’s happening in our military. For too long, progressive Pentagon staffers have been calling the shots for our warfighters, and spineless military commanders have let it happen. Now we are going to expose you,” he said.

After reading the whistleblower form itself, many quickly noted that the promise of protection seems to fall flat.

A lawyer, Max Kennerly, pointed to a sentence in Crenshaw’s tweet, in which the Republican claims “Your complaint will be legally protected,” and a portion on the form that reads: However, you still take serious risks when you report allegations of wrongdoing. We recommend that you consult an attorney experienced in whistleblower law for further guidance.”

“‘Your complaint will be legally protected’* *Eh, maybe not, I don’t care, whatever happens is on you buddy, you should know better than to trust Dan Crenshaw and Tom Cotton,” Kennerly said of the apparent conflicting remarks.

“Just to reiterate, Dan Crenshaw & Tom Cotton just set up a fake whistleblower website that will actually get US service members in a lot of trouble, with zero legal protection,” lawyer John Aravosis tweeted.

Others are saying Crenshaw himself shouldn’t be entrusted with whistleblower complaints given his history of allegedly being part of a smear campaign against a female veteran after she claimed she was sexually assaulted.

And some are simply taking the moment to reflect on Pete Davidson’s apology to Crenshaw—a former Navy SEAL who lost his right eye in Afghanistan—for mocking his eyepatch on Saturday Night Live back in November 2018. Davidson, who apologetically takes credit for Crenshaw’s rise to power, later rescinded the apology and admitted he “kind of got forced” to apologize.

“Dan Crenshaw is what happens when you force mid range SNL actors to apologize to white trash Bond villains,” one said.

The webpage backfired on Crenshaw as many are sarcastically urging his critics to not “submit random bullshit.”

“I filled one out for Jim Jordan confessing his crime of covering up sexual assault,” one Twitter user said of the Republican congressman being accused of turning a blind eye to sexual misconduct allegations against a team doctor when he was a wrestling coach at Ohio State University.

Another used the form to call for the uncancelation of the term “liberty cabbage.” And other submissions appear inspired by movie and TV show plots.

The campaign by Crenshaw and Cotton was announced after Cotton met with Lt. Col. Matthew Lohmeier, the former Space Force commander, on Thursday, according to the New York Post. Lohmeier was removed from his command after reportedly criticizing diversity and inclusion initiatives in the military and claiming Marxism is infiltrating it while on a conservative podcast.