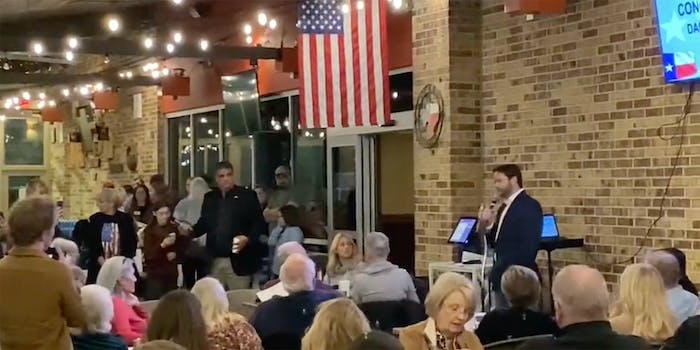 ‘Literally got wrecked by a high schooler’: Dan Crenshaw heckled in viral video of confrontation with young girl about religion

Crenshaw is being criticized from all sides over the viral video.

Rep. Dan Crenshaw (R-Texas) is in the hot seat over a viral video of him accusing a young girl of questioning his faith at a recent event.

In the video, an unidentified girl read a quote from Crenshaw about “hero archetypes.”

“I can’t wrap my head around this,” she said.

“Well, I’ll help you,” Crenshaw retorted. “Put a period after the word ‘Jesus.’ And don’t question my faith.”

The crowd erupted in a chorus of boos, shouts of “wow,” “you moron,” and other heckling. “Don’t talk to a kid like that, jerk,” one man yelled.

Crenshaw reiterated that people shouldn’t question his faith. “You guys can ask questions about all of these things and I will answer them, but don’t question my faith.”

The girl stood her ground. “I can question your faith if this is what you said,” she said.

“Nowhere in that quote am I saying Jesus isn’t real. That is a ridiculous statement,” Crenshaw said, adding in response to continued heckling, “Of course Jesus is the son of god.”

Crenshaw later accused the girl of “twisting” his comments about superhero archetypes and Jesus, which were apparently made on a recent podcast.

Some in the crowd then began shouting, “Let’s go Brandon,” which has become code for “fuck Joe Biden.”

The video was posted by Scott T. Parkinson of Club for Growth, a conservative political group that describes members as “pro-growth, limited government Americans.”

Critics include people on both sides of the political divide. Some accused him of being a RINO, or “Republican in name only.”

Conservative commentator Peter D’Abrosca tweeted that Crenshaw “literally got wrecked by a high schooler.” (The girl’s age is unknown.)

A Twitter user who describes themselves as an antiracism and human rights advocate tweeted, “If there’s one thing that triggers Dan Crenshaw, it’s a 10-year-old girl directly quoting him.”

Crenshaw hasn’t addressed the blowback or clarified whether he believes Jesus can leap over tall buildings in a single bound.