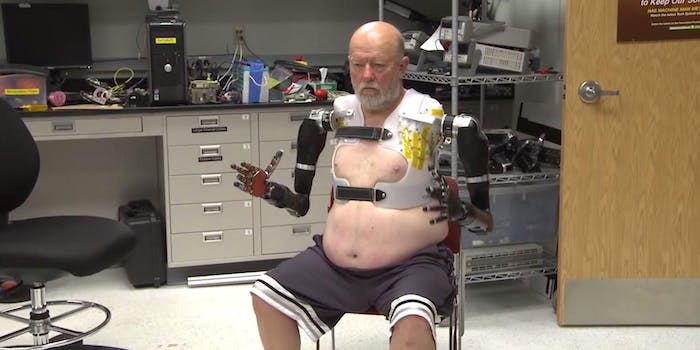 Robotics and medicine combine to give a man his arms back.

Four decades ago, Les Baugh lost both his arms in an accident. Now, thanks to the magic of robotics he has the opportunity to get them back, with a good bit of help from the Johns Hopkins University Applied Physics Laboratory.

For years, the best an amputee could hope for was a prosthetic that looked natural and offered the patient a portion of their original abilities. Johns Hopkins University and the government’s DARPA group have spent the past decade creating a piece of hardware that offers a whole lot more. It’s called the Modular Prosthetic Limb—MPL for short—and it’s as close to real cyborg technology as humanity has ever gotten.

The MPL is a wireless synthetic limb that is controlled with your mind—yes, you read that correctly. Les Baugh provided a great opportunity to test and further improve the technology, as his shoulder-level amputation was a particularly challenging case.

The process began with surgery to move nerves in his chest. Those nerves act as input for the MPL, and allow the patient to control the robotic joints simply by moving the chest muscles that are already there. It’s a lot like controlling actual human arms—your brain sends a signal to your muscles and nerves in order to initiate motion—but in this case the nerve and muscle activity is being picked up by the MPL’s sensors and translating it into mechanical output.

While waiting on adjustments to the fitment of the harness that serves as a platform for the MPL, Baugh trained his muscles and mind to control the robotic limbs using a virtual reality simulation. Once the real deal was ready for its big debut, Baugh was able to perform some of the simple tasks that those with working arms often take for granted, such as picking up a ball or manipulating something as basic as a cup.

The marriage of man and machine worked as intended, and it was a historic achievement for both the program and modern medicine as a whole. But as impressive as it was, it’s just another step towards giving amputees—including wounded armed service members—their lives back.