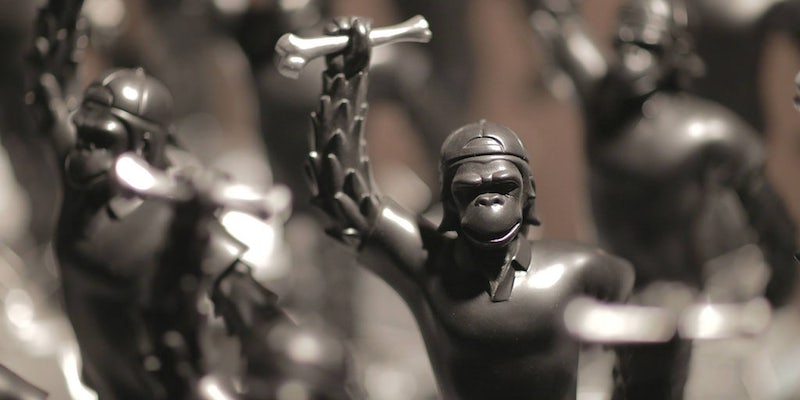 Why no one takes the Crunchies seriously

Technology deserves an awards show. This isn't it.

“Oh, but no one really takes it seriously,” seemed to be a common refrain at last night’s Crunchies, the technology award show hosted by TechCrunch and VentureBeat.

For something that isn’t taken seriously, it’s pretty damn opulent. Attendees wear suits and cocktail attire; the event was held at the San Francisco’s Davies Symphony Hall, which must cost thousands of dollars to rent. The tickets themselves are expensive; some people forked over hundreds just for a seat. (Disclaimer: I received a free press pass.) Even the awards themselves, a hunk of metal that looks like a gorilla standing atop a pile of computers with a bone, can’t be cheap. 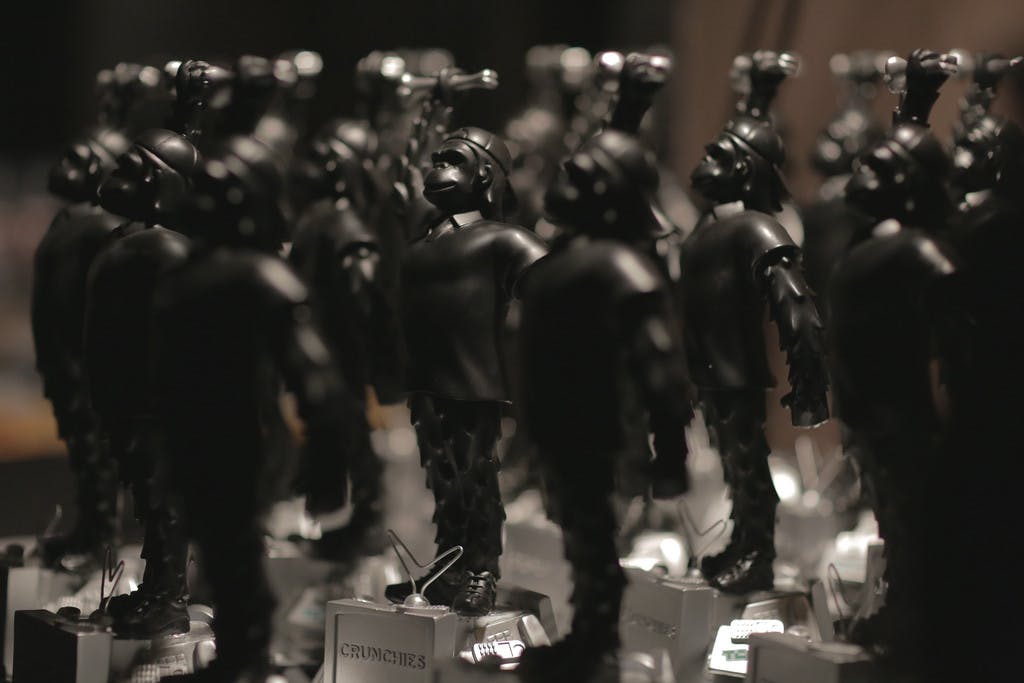 The glamour of the night set against the apparent apathy is strange, to say the least. It feels like a high school dance, where 16-year-olds spend hours getting ready, only to nonchalantly slump against a wall like they couldn’t care less where they are. Except the 16-year-olds are entrepreneurs and investors who say they want to change the world, and the dance is a glorified pat on the back between million-dollar companies and the media that covers them.

I quickly understood why “no one really takes it seriously.”

Thursday night, the eighth annual Crunchies was my first time at the event. And it will probably be my last.

Uber was crowned the “best overall startup” of 2014—the company that’s valued at over $40 billion and had a significant amount of controversy over the past year, including (but hardly limited to) skirting local transportation laws and threatening a journalist.

Also in the running for startup awards were the publicly traded companies GoPro and Lending Club, along with Reddit, the “front page of the Internet,” founded in 2005 and formerly owned by Condé Nast. 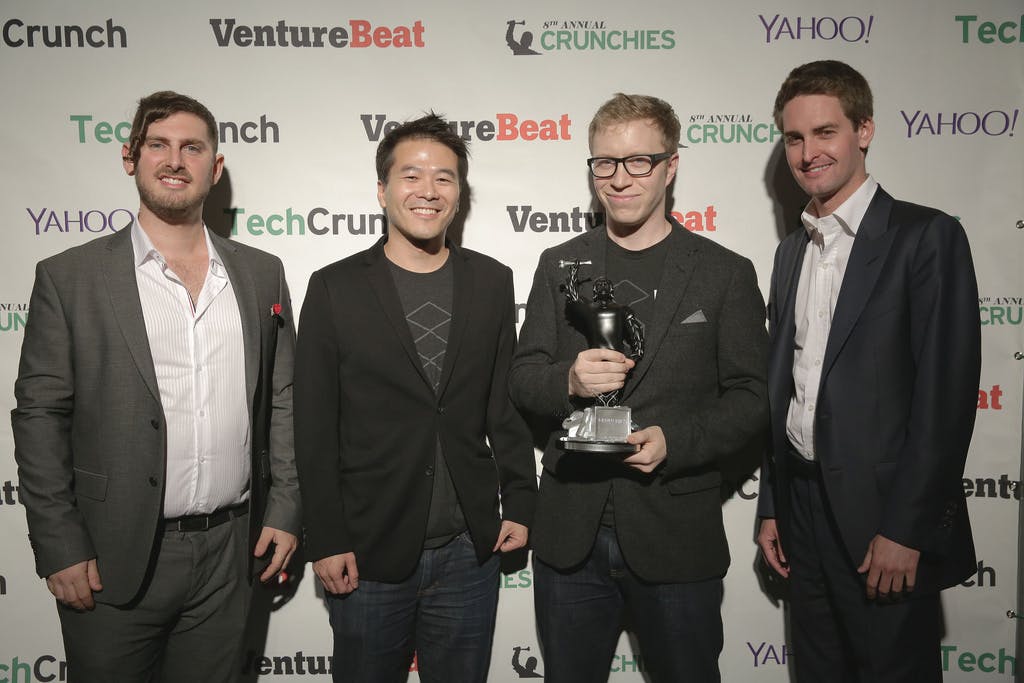 Part of my confusion with the Crunchies is calling these publicly traded and nearly 10-year old, corporation-owned businesses “startups.” Though, of course, it doesn’t really matter: It just feels like a big “congratulations on your continued and expected success!” for these companies that regularly appear in the media. It’s rather… meaningless.

I quickly understood why “no one really takes it seriously.”

The Crunchies was hosted by Silicon Valley’s T.J. Miller. The comedian known for his role as Erlich Bachman in the show that skewers the technology industry was the event’s emcee, and though it started off with humorous satire, his routine quickly devolved throughout the night. At one point, Miller called a woman a “bitch” on stage.

@selenalarson I felt like I was the only one appalled by that. Kept looking around for confirmation but everyone around kept laughing.

Despite the overall insularity of the night, there were a few attempts that reminded everyone that there is a world outside Silicon Valley. To kick off the show, angel investor Ron Conway brought out London Breed, the Supervisor for District 5 in San Francisco to talk about the importance of civic engagement and being involved within the community.

But just as quickly as we were reminded of the bigger picture, it was made clear that it’s only so big. Conway asked the audience to raise a hand if they lived in South Bay, where Google and Facebook are located; then again if they lived in San Francisco, the home for so many startups. Without acknowledging the East Bay, the area that includes Oakland and Berkeley, Conway moved on.

And just to really cement industry stereotypes, Breed was one of three women who weren’t presenters that spoke on stage at the event. Elizabeth Holmes, founder and CEO of Theranos, accepted the award for best health startup, and Jeanie Han, CEO of Line Euro-Americas, thanked the audience after winning the best international startup.

Salesforce CEO Marc Benioff was honored as CEO of the year, largely due to the billionaire’s commitment to supporting non-profits and other local initiatives within the community. He touted his 1 percent plan to the audience made up largely of startup CEOs: Give 1 percent of your time, money, and equity to charity. Not everyone was paying attention.

I don’t know what I was expecting. Well, actually I do: I was hoping the industry would respond to criticism, or at least acknowledge it. I was hoping that companies who so often write about representing minorities in tech would represent them. I was hoping to hear about plans for change and civic engagement. But the Crunchies, as I learned, is not the place for any of that. It really is the Oscar’s of tech: The same people win awards, the same people get snubbed. We all dress up, millionaires congratulate millionaires, and then we go home.

The night’s “Biggest Social Impact” award (which went to Twitter) was a blip in the evening. (The runner-up was “Tim Cook’s Public Coming Out.”)

So I propose a change.

This industry should have a tech awards show but one we can take seriously. We should recognize the makers and founders and people who are moving the industry forward in ways that weren’t recognized on Thursday.

Let’s give Kimberly Bryant of Black Girls Code a Crunchie for empowering young girls in underrepresented communities to pursue an interest in programming.

Let’s give Brianna Wu and Lindy West Crunchies for standing up to online harassment and working to improve the lives and safety of women on the Internet.

Let’s give SpaceX a Crunchie for (almost) landing a rocket on a boat and pursuing private space travel to Mars.

Let’s acknowledge ideas like Be My Eyes, an ingenious app to help the blind see, and give more attention to 3D-printing body tissues.

Let’s give Andrea Gonzales and Sophie Houser, two teenagers from New York City, Crunchies for building a mobile game to help end the stigma around periods.

Now that would be an award show we could take seriously.

Update 10:10am CT, Feb. 6: This story has been updated for clarity and to include the name of Jeanie Han.