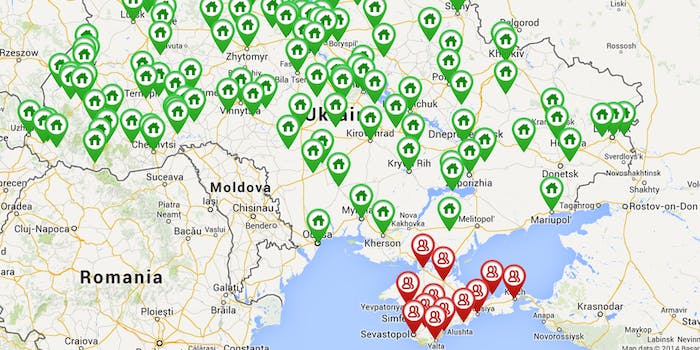 Couchsurfing for a time of crisis.

Even before Russia’s annexation of Crimea, there were crowds of people trying to evacuate the region. Now, thousands are reportedly pouring into mainland Ukraine following the successful Russian invasion. Naturally, the Internet is doing its part, crowdsourcing temporary homes for as many refugees as possible through social media and a brilliant use of Google Maps.

In the Crimean city of Sevastopol, all it took was the heightened presence of Russian troops, tanks, and helicopters for some Crimea-born citizens to grab what they could and board packed trains headed for Western Ukraine. A large portion of the people now searching for new homes are reportedly women and children. But thanks to a PR manager named Anna Sandalova, Google Maps, and a few thousands social media users, there are rooms, apartments, and houses suddenly available throughout Ukraine.

While searching for a way for people who weren’t facing bullets in the streets to contribute, Sandalova launched a Facebook page with the goal of finding homes for Crimean families, especially those with children. Within a week, she had helped place over 20 families.

Sandalova’s page now has over 1,000 followers and provides telephone assistance for anyone wishing to leave Crimea but unsure how to do so. Pinned at the top of Sandalova’s page is a form that Ukrainian citizens can use to offer displaced Crimean families shelter, among other resources for those in need .

Temporary shelters are also being set up to house Crimean refugees, according to Lyudmila Denisova, Ukraine’s social policy minister, who reportedly told her deputies the state would accommodate all citizen who enter the mainland.

Recently, a new website called One Country was launched using Google Maps to accomplish the same goal as Sandalova, finding more homes for more Crimean refugees on the journey to Kiev.

One Country facilitates the entire migration process for refugees. Ukranians with available homes can list their location, while Crimeans looking to move into mainland Ukraine can identify themselves on the map. Transportation services are also listed, to help families relocate.

At the moment, there appear to be far more available homes than there are Crimean refugees. One Country currently lists more than 1,200 homes available to the approximately 150 families searching for a place to go. So far, nearly 500 families have used One Country to relocate into mainland Ukraine.