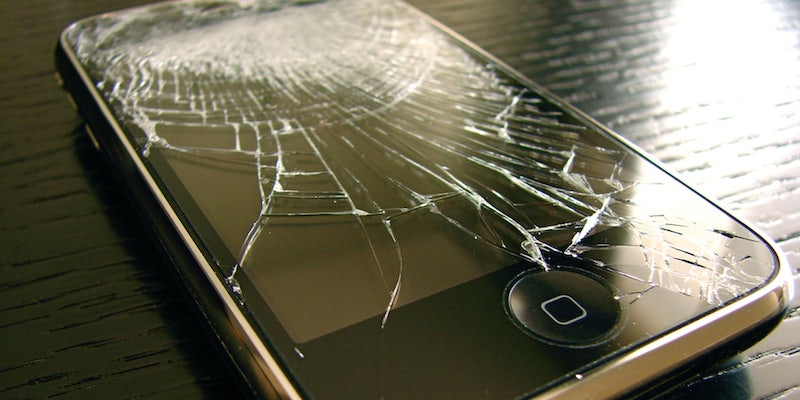 Photo via magic_quote/Flickr (CC BY 2.0)

Good pranks are harmless and funny. CrashSafari is not a good prank. The website, which has been shared relentlessly by unrelenting pranksters on social media sites, causes Apple devices to crash.

CrashSafari is a fairly simple site, though its purpose is devious at best. According to Open Whisper Systems software and security engineer Frederic Jabobs, the site executes a small JavaScript program that continuously adds characters to the URL bar.

“Very quickly, the browser runs out of memory and the process in charge of loading that page is killed by the iOS operating system to prevent the phone to be unresponsive,” Jacobs explained to the Daily Dot.

Visiting the site on an iPhone will make the phone freeze up, kicking the handset into high gear to process the infinitely multiplying code that the site produces. After a short time, the phone will be forced to reboot itself. Jacobs said fixing the issue will require Apple to release an iOS update.

Apple did not respond to request for comment at the time of publication.

While the site is particularly good at sending iPhones and iPads into a forced restart, it can also do a number to laptops and desktops. Bigger processors can prevent a total crash, but the site can still inconvenience most computers.

As the name suggests, CrashSafari can take down Safari on Macs—but that doesn’t mean you’re safe on other browsers. Jacobs pointed out the site can also hit Chrome users thanks to a Chromium bug that leaves the browser vulnerable to being overwhelmed. Android and PC users should be able to force the browser process to end without being forced to reboot.

CrashSafari has already been shared somewhere in the vicinity of way too much. The link itself has been posted on Twitter with regularity over the last 24 hours. Sneakier pranksters have started sharing a shortened URL version of the link, often accompanied with text about a new Drake track or claims that it’s a leak of Kanye West’s new album.

One shortened URL link to CrashSafari has already generated over 165,000 clicks—including 115,00 on Safari. That’s a lot of very angry iOS users.

If you come across a shortened URL that you are unsure of, you can use a tool like LongURL or URL Expander to see where the link will take you before actually visiting it.

The prank is reminiscent of a similar occurrence that swept across the web last May, when a text message with Unicode characters caused the iPhone to crash when it failed to display the text.

If you sent the malicious text message or you’re thinking about sharing the link to CrashSafari in hopes of tricking your friends into clicking on it, try this instead: Find a mirror, take a long look into it, and try to figure out what went wrong in your life that made you such a terrible person.

Photo via magic_quote/Flickr (CC BY 2.0)