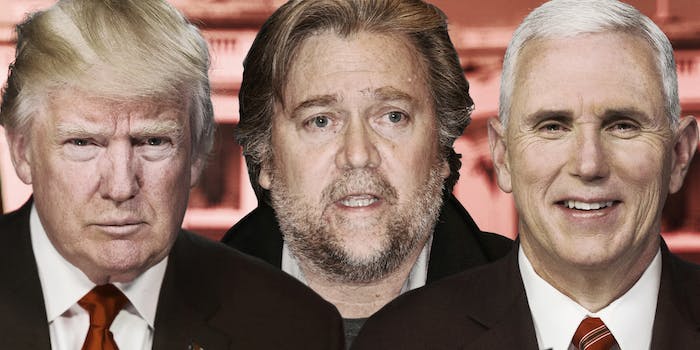 Trump is expected to give the keynote address.

Where else can religious conservatives, climate change skeptics, and LGBT Republicans party in the same room together? CPAC, that’s where.

The Conservative Political Action Conference, better known as CPAC, is the biggest annual event in conservative politics—and this year’s conference, which kicks off on Wednesday, could be a doozy.

President Donald Trump will keynote the convention on Friday morning, which makes him the first sitting president to do so since Ronald Reagan. The past two Republican presidents, George H.W. Bush and son George W. Bush, avoided CPAC once elected and sent their vice presidents to speak in their absence instead.

Trump’s decision to speak at CPAC may also be surprising if you remember that, only a year ago, he abruptly dropped out of speaking at CPAC after Republican opponents threatened a walkout.

Given the Trump White House’s hatred of conventions and obsession with headlines, however, his decision to speak at CPAC isn’t much of a curveball. Even if his remarks ruffle a few feathers among various factions of conservatives—such as when he held a major rally in Florida last weekend or appointed Republican National Party Chairman Reince Priebus as White House Chief of Staff and allowed him to regularly attend National Security Council meetings—any outrage likely won’t outlast his next big offense.

What is CPAC, exactly?

CPAC is basically the event where the full spectrum of conservative voices get to meet and hash everything out. And they’ve been doing it for decades.

A group of conservatives known as the American Conservatives Union held the first Conservative Political Action Conference in 1974. On the heels of Watergate and the Republican party facing an unknown future, California Governor Ronald Reagan addressed the first CPAC convention.

“Over the past three decades CPAC has become the premier conservative gathering—an eagerly anticipated annual event for conservatives who see the conference as a unique opportunity to renew old friendships, trade information, exchange views, assess candidates for President, get updated on policy and program initiatives, hear legislative reports and get their batteries recharged by listening to inspirational speeches by the leaders of American conservatism.”

The conference itself isn’t, but occasionally controversial or otherwise newsworthy things will happen.

The conference has hosted a diverse array of right-wing voices, from white supremacists like VDARE’s Peter Brimelow and black conservatives like Wayne Dupree, pro-Israel Jewish Republican groups and evangelical Christians, gay Republicans, outright Islamophobes such as Frank Gaffney of the Center for Security Policy as well as Dr. M. Zuhdi Jasser of American Islamic Forum for Democracy, a reform-minded Muslim group aimed to defeat radical Islam.

As such, CPAC has seen its fair share of awkward moments and scandals throughout the years as more radical elements of the Republican Party wrestle with the moderate Republican establishment for power.

In 2007, for example, conservative commentator Anne Coulter referred to former Democratic vice presidential candidate John Edwards as a “faggot” and was sharply rebuked by LGBT rights groups and the establishment in Washington. (She later fought back against criticisms of being homophobic in a subsequent Q&A session: “Well, you know, screw you! I’m not anti-gay. We’re against gay marriage. I don’t want gays to be discriminated against.”) Gay Republicans were unceremoniously booted from CPAC in 2013 due to a “purity panic” within the Republican Party (they simply rented out a conference room in the same resort where CPAC is hosted and held an unofficial panel that year).

Aside from Trump, is there anything noteworthy about this year’s CPAC?

CPAC 2017 is likely to strike a very different tone this year. Not since the late Andrew Breitbart spoke at CPAC in 2012 has the far-right news organization, Breitbart News, held more influence at the high-profile gathering.

Breitbart prided itself on holding a sort of “anti-CPAC” in 2013 and 2014 and hosted speakers that weren’t invited to CPAC at a separate event held down the street. Lead by Steve Bannon himself, the event, known as “The Uninvited II: The National Security Action Summit,” included Center for Security Policy President Frank Gaffney, who was banned from CPAC in 2011 due to his belief that American Conservative Union board member Grover Norquist is a secret agent of the Muslim Brotherhood.

When is CPAC? And how do I watch?

CPAC begins on the morning of Wednesday, Feb. 22, and will end on Saturday, Feb. 25. Most events will be livestreamed on C-SPAN.org.

Where is the event taking place?

The conference is being held at the Gaylord Resort in National Harbor, Maryland.

Which speakers should I look out for?

There are a whole lot, and things may change between now and then. But here’s the lineup as of Wednesday morning.

Wisconsin’s anti-Trump Gov. Scott Walker is expected to speak on Thursday morning at 10:05am ET, along with governors Sam Brownback of Kansas, Doug Ducey of Arizona, and Matt Bevin of Kentucky.

Secretary of Education Betsy DeVos will speak at 12:50pm ET.

Steve Bannon and Reince Preibus will take the stage together at 1:10pm ET.

The day will be capped off with a speech from Vice President Mike Pence at 7:30pm ET.

President Trump will speak at 10:20am ET—expect his remarks to dominate the news on Friday.

Scott Pruitt, the new administrator of the Environmental Protection Agency, will speak at 1:50pm ET.