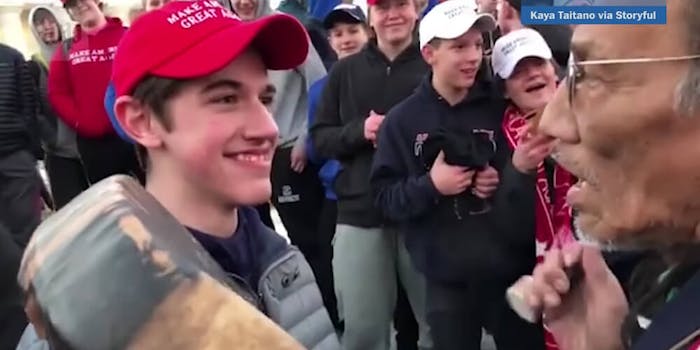 He sought $275 million in compensatory and punitive damages.

CNN has reached a settlement with Nicholas Sandmann, the teenager from Covington Catholic High School who was at the center of a viral video last year that showed him staring at a Native American elder amid protests in Washington D.C.

In March, Sandmann sued CNN for defamation, seeking $275 million in compensatory and punitive damages. The amount of the settlement was not made public, according to Fox 19 in Cincinnati.

The student, who was wearing a Make America Great Again hat, was filmed staring down Nathan Phillips after an anti-abortion rally in Washington, D.C., in January. Clips of the encounter went viral and were interpreted in different ways.

Sandmann had sued a number of media outlets after the incident, which occurred in January last year.

At the time his lawsuit was filed against CNN, the Daily Beast reported that it claimed the news organization referred to Sandmann and his fellow classmates as engaging in “racist conduct.”

“CNN brought down the full force of its corporate power, influence, and wealth on Nicholas by falsely attacking, vilifying, and bullying him despite the fact that he was a minor child,” the suit read at the time, according to the Daily Beast.

You can read all of the Fox 19 report here.