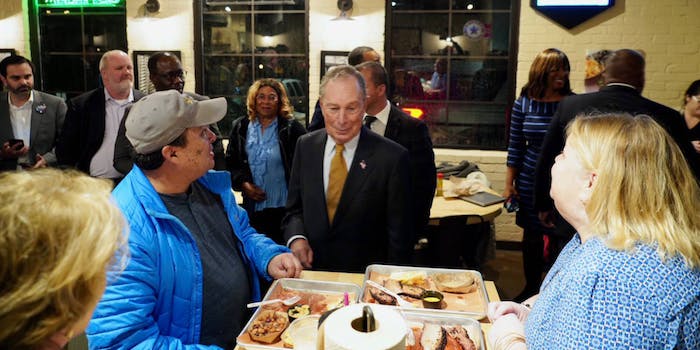 Michael Bloomberg declares his love of ribs with picture of brisket

The debate between southern and northern barbecue may have just gotten harder, given that we’re now clearly operating under completely different terms.

Turns out, we’re not the only ones who noticed something amiss.

“Is candidate Bloomberg unaware that brisket is not ribs or does he usually see imaginary ribs?” One user noted.

Is candidate Bloomberg unaware that brisket is not ribs or does he usually see imaginary ribs?

A more plausible explanation centers around Bloomberg’s previous regulations of less healthy dining options. In the early 2010s, he attempted to have soft drinks larger than 16 ounces banned during his final term as mayor of New York City. Ultimately, this ban was overturned in 2014.

“Mike is worried about the salt, fat and carbon footprint of that food,” a user wrote. “He’d tax or regulate it out of existence. That Coca-Cola sign clearly worries him.”

Whatever the reason for his facial expression, this photo from the Bloomberg campaign is rubbing people the wrong way. One user went so far as to call it “judgmental.”

“He looks like he’s judging it a hundred different ways. I don’t want anybody to look at me that way. And it’s brisket not ribs.”

He looks like he's judging it a hundred different ways. I don't want anybody to look at me that way. And it's brisket not ribs.

Whether Bloomberg is indeed familiar with what ribs are, one social media staffer certainly isn’t.

Does anyone at the Bloomberg campaign know what BBQ ribs look like?

While this likely won’t be as big as John Kerry’s cheesesteak snafu, it’s nonetheless disconcerting.