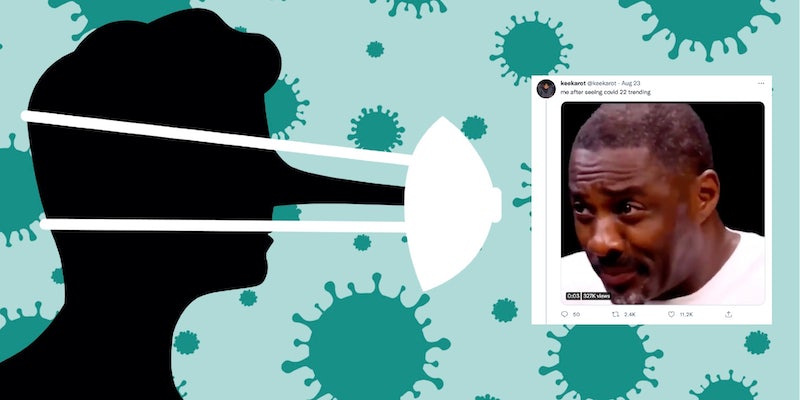 Social media users freaked out about COVID-22, but experts assured it’s not real

The frenzy started with a Swiss tabloid article that warned of a 'deadlier' strain, misnamed as COVID-22.

Social media was sent into a frenzy on Monday after Swiss publication Blick published an article quoting an immunologist warning people about “COVID-22,” which he says is deadlier than the Delta variant. However, it’s not a real disease and a new virus of that name is unlikely to exist.

The confusion was a classic internet misinterpretation after Blick spoke with Sai Reddy, Ph.D.—a professor and immunologist from Switzerland—who said a new variant of the COVID-19 virus “could appear in 2022” and pose a “big risk” to the general population. He warned that the new variant could also evade current vaccines and continue to mutate and personally called the not-yet existent, worrying strain “COVID-22.”

As soon as rumors of COVID-22 showed up on social media, it snowballed and began being taken out of context. Tabloids like The Sun and Mirror began publishing misleading headlines, alluding to the possibility of a new worrying strain.

Social media users were confused as to whether or not they should be concerned or not.

But experts attempted to ease some worries by speaking with publications about this fictitious disease and what to expect going forward. For starters, the name COVID-19 is an acronym for the disease brought on by SARS-CoV-2 and the year it was discovered. “COVID-22” implies the discovery of a new disease in 2022, which is unlikely to be the case.

“COVID-19 got its name because it showed up in 2019,” infectious disease specialist and professor William Schaffner, MD told Health.com. “But all of the variants—strains that are similar to but still different from the original COVID-19—are given names from the Greek alphabet.”

He further clarified that if there were any new variants of the COVID-19 virus, they would be not be named in the year that they were discovered and scientists would continue to use Greek letters to name it—hence the Alpha, Gamma, Delta, and Lambda symbols that have already been used.

Another medical professional, Martin J. Blaser, MD who is a professor of medicine, pathology, and laboratory medicine told Health.com that the disease would have to differ significantly from COVID-19 for it to be considered COVID-22. “I don’t think that there’s going to be any cataclysmic new virus coming out next year or 10 years later,” Blaser told Health.com. “That’s unknowable. What we can predict is that there will be new variants of COVID-19. Some of these variants may be better or worse. Time will tell.”