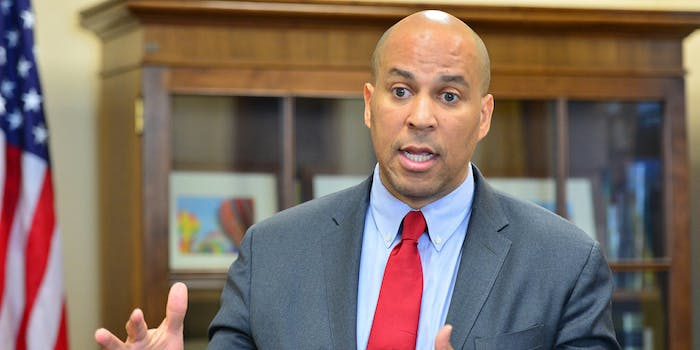 Cory Booker sidesteps question about prisoners having the right to vote

People online called him out on it.

Sen. Cory Booker (D-N.J.) has some people confused after he sidestepped a question about whether those currently in jail should be disenfranchised from voting.

Booker, a 2020 Democratic presidential hopeful, made the remarks while speaking with PBS News Hour.

The New Jersey senator was asked about Sen. Bernie Sanders (I-Vt.), a fellow 2020 contender, and his views that prisoners who are in jail should have the right to vote–including Dzhokhar Tsarnaev, the Boston Marathon bomber.

Specifically, he was asked whether or not he agreed with Sanders. Booker, instead of answering the question outright, called the current framing of the debate “frustrating.”

“So if Bernie Sanders wants to get involved in a conversation about whether Dylann Roof and the marathon bomber should have the right to vote, my focus is liberating black and brown people and low-income people from prison, because we have a system in America, as Bryan Stevenson says, that treats you better if you’re rich and guilty than if you’re poor and innocent,” he told the news outlet. “My focus is tearing down the system of mass incarceration, so that we don’t even have to have the debate about people’s voting rights, because they’re not going to prison in the first place. People that don’t belong there are there. And I’m going to stop that as president.”

Booker is correct that the justice system in the United States has overwhelmingly impacted people of color. In fact, he’s made criminal justice reform a major theme of his campaign.

However, a number of people online flagged that the New Jersey lawmaker dodged the question about incarcerated citizens having the right to vote–and pointed out that the original question, and Booker’s response, are two issues that are worthy of debate and discussion.

Cory Booker, asked if prisoners should have the right to vote, dodges the question and takes a shot at Bernie Sanders: https://t.co/Jgd4o6HtE7 pic.twitter.com/w1x6l2w8YU

Booker is so devoted to prisoners' rights, he has no time to expand the rights of prisoners.

1. You can have more than one conversation at once. Bernie has proved this by cosponsoring Booker's CJ legislation while talking about voting rights for prisoners.

The question, @corybooker, is not whether a person who committed a crime (no matter the crime) deserves the right to vote — the question is whether a government should ever be given the power to choose its voters in the first place. https://t.co/COOngwTvAT

You can read a transcript of Booker’s interview with PBS News Hour here.