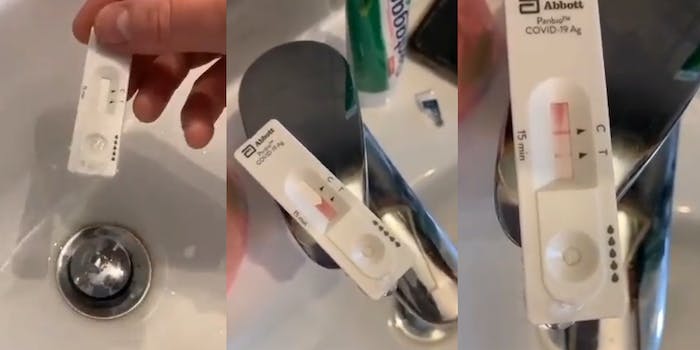 A video making waves across social media has some conspiracy theorists convinced that the U.S. water supply has been poisoned with COVID-19.

But the claim isn’t true.

The video in question shows an individual running tap water over a COVID rapid test before asserting that a positive result was produced, evidence that the virus is either in the water or that the test itself is faulty.

The footage was widely promoted on Telegram by Ron Watkins, the QAnon guru turned congressional candidate, where more than 267,000 users were exposed to the claim.

Some even suggested that the viral clip proved that the water contained “graphene oxide,” a substance that conspiracy theorists falsely claim is present in the vaccine.

Over on Twitter, the video went viral after being shared by a Canadian doctor named Patrick Phillips who argued that the specific test “should be recalled immediately.”

Phillips was suspended from Twitter shortly after. And it turns out that the doctor is no stranger to controversy either.

Phillips was called “incompetent” and accused of spreading misinformation last September by the College of Physicians and Surgeons of Ontario, who barred the doctor from numerous tasks such as prescribing his patients with with the unproven treatment ivermectin.

Aside from the credibility issues facing Phillips, the viral footage contains several issues as well. For starters, the rapid test used in the video, developed by Abbott Laboratories, is not intended to be used with liquids.

The play clock is ticking on this giveaway…

Time is running out for you to enter into one of the biggest NFL sweepstakes of the year! Sign up with just your name and email address for a chance to win the grand prize:

There are only HOURS left to enter the sweepstakes. Sign up right now to win the ultimate Cowboys fan experience!

In a statement to the Daily Dot, a spokesperson for the company noted that the test “is for use with samples collected with a nasal or nasopharyngeal swab inserted into a person’s nostrils.”

Another issue is that the test takes 15 minutes to complete. The video shows the individual barely waiting two minutes before making their conclusions.

In fact, similar videos were debunked late last year after an Austrian politician claimed to show a different rapid test producing positive results after coming into contact with Coca-Cola.

It turns out that the politician failed to do the test correctly. The company that produces the test later showed on video how Coca-Cola would actually show a negative result when tested correctly.

The spokesperson for Abbott Laboratories described the water testing video as “misleading and irresponsible” in comments to the Daily Dot.

“When used as intended, it is a highly accurate test that is helping to detect COVID-19 across the world and can significantly improve efforts to control transmission,” the company said. “Spreading misinformation with deliberate misuse of a medical product during a pandemic is misleading and irresponsible.”

It should also be noted that numerous government agencies including the Environmental Protection Agency (EPA) have determined that COVID has not been detected in drinking water.