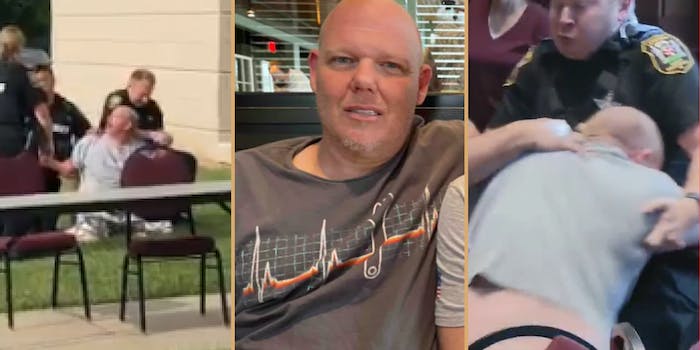 Conservatives claim a school ‘covered up’ an alleged rape by a nonbinary student. There’s more to the story

Conservatives are omitting details and misstating the facts in sad tale of student's alleged sexual assault.

Right-wing figures are in an uproar over a father’s claim that a Virginia school system attempted to cover up his daughter’s rape so it could pass transgender inclusive policies. His allegations have renewed outrage over anti-trans so-called “bathroom bills” that allow students to use the bathroom corresponding to their gender identity.

Right-wing figures and media outlets have seized on Smith’s allegations as proof that allowing transgender students to use the bathroom that corresponds with their gender identity is dangerous.

Multiple studies, including one by researchers at Harvard University, have actually found that not allowing them to do so is dangerous. “Transgender and gender-nonbinary teens face greater risk of sexual assault in schools that prevent them from using bathrooms or locker rooms consistent with their gender identity,” the study found.

The full story is more complex than conservatives are admitting, however, and some of the details don’t match their versions of events.

Scott Smith was arrested at a contentious Loudoun County School Board meeting in June where he says he planned to speak about his daughter’s alleged assault on May 28. He claims she was assaulted in a school bathroom by a gender fluid student.

Earlier this week, the Daily Wire reported on Smith’s claims. Smith told the outlet that at the meeting the school board denied that any transgender or gender non-conforming students had assaulted anyone in a school bathroom. It’s being described as a “cover up.”

A GoFundMe for Smith’s legal fees says that he was “waiting to share his concerns” at the meeting when he was “heckled and badgered by a known agitator stating that his story wasn’t true.”

Most of the coverage and commentary by conservatives has uncritically repeated Smith’s claims.

After the Daily Wire published its story, the Washington Examiner posted an op-ed called, “Loudoun County schools covered up rape, prosecuted a concerned father to protect transgender agenda.” Other right-wing figures like Jack Posobiec and Rep. Dan Crenshaw (R-Texas) have also weighed in.

Records and video of the incident, however, don’t line up precisely with these versions of events.

Police confirmed that a sexual assault was reported in May as Smith alleges, the local ABC News affiliate reports. The alleged perpetrator is reportedly expected to plead guilty later this month to assaulting Smith’s daughter and another student at the different school. They were transferred to the other pending the outcome of the police investigation.

Reporting an alleged crime the day it occurs isn’t what most would describe as a cover up.

It is true that the school hasn’t released details about the incident, but the school says this is because student privacy rules prohibit it from doing so. It also says that school board members didn’t know about the allegation until recently.

On Wednesday, the school said that due to students’ privacy rights, it cannot reveal details about individual student’s actions, the ABC outlet reports. It also said that board members aren’t typically informed of disciplinary matters.

“Consequently, members of the Loudoun County School Board were not aware of the specific details of this incident until it was reported in media outlets earlier this week,” it said.

Some conservatives have also said that Smith was arrested because he merely “protested school policy.” A video posted at the time by a Fox affiliate paints a different picture.

The video shows Smith speaking heatedly with a woman in the audience during the meeting. Several officers stand around them. As he appears to grow more agitated, one officer standing to his side puts a hand on Smith’s arm in apparent attempt to get him to back away from the woman. As the officer begins to lead him away, Smith initially seems willing to comply. Then he jerks his arm away and grapples with police for a few seconds before being forced to the floor.

According to Loudoun Now, Smith continued struggling with officers and threatening to kick their teeth out as they took him outside. He was subsequently charged and convicted of disorderly conduct and resisting arrest, the outlet adds.

The school system also reportedly says that Smith hadn’t signed up to speak during public comment at the meeting. This week, it said in a statement, “We are unable to locate any records that indicate that Scott Smith had registered in advance to speak at the June 22, 2021 board meeting.”

Much of the commentary also portrays the Loudoun County School Board as acting at its own discretion to adopt transgender-inclusive policies. They fail to point out that the state order all schools to adopt such policies.