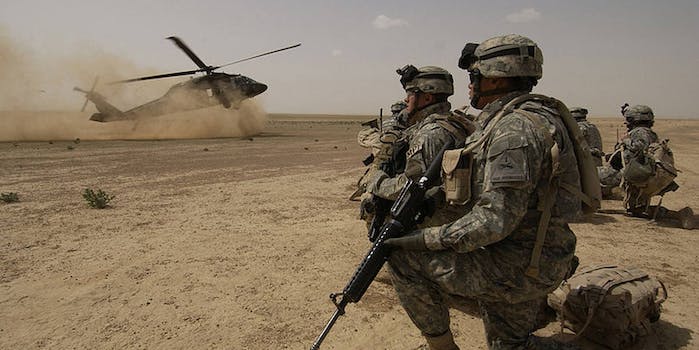 Rep. Barbara Lee knows a thing or two about voting on going to war. When Congress voted to give President George W. Bush the authority to invade Afghanistan shortly after 9/11, the Democratic California congresswoman was the lone dissenting voice in the House of Representatives.

In the ensuing 15 years, Lee has received harsh criticism and a number of death threats, but she still stands by her vote with more conviction than ever. “When I voted ‘no,’ I said it was a blank check and would set the stage for perpetual war, and that’s what it’s done,” Lee said in a 2014 interview with the Hill. “I think members now understand it was a blank check. No way should we give any president authority to wage a war forever.”

In a very important way, Lee was right about how the 2001 Authorization Use of Military Force (AUMF) has been used dozens of times by both the Bush and Obama administrations to justify military actions ranging from intervening against ISIS in Iraq and Syria to indefinite detentions of prisoners in Guantánamo Bay. The problem, Lee argues, is that the executive branch’s broad interpretation of the AUMF has allowed the country to effectively wage war without first receiving approval from Congress, as is constitutionally required.

On Thursday, Lee joined with a handful of other lawmakers on a bipartisan campaign to repeal the AUMF, thereby forcing Congress to vote on authorizing military actions that are already underway against ISIS and its affiliates across the globe.

Lee is pushing the campaign with the hashtag #CongressMIA.

Congress owes the American people a full debate on the costs and consequences of #endlesswar. #CongressMIA pic.twitter.com/FtFfMuMbj9

I’m calling out Congress at the Capitol – it is a disgrace that we haven’t debated the war on #ISIL. Our troops deserve better. #CongressMIA

The Huffington Post reports that the group’s plan involves inserting language into the National Defense Authorization Act, which Congress needs to pass in order to keep the military funded, that would repeal the 2001 AUMF, thereby forcing another vote if the U.S. wants to continue taking military action against ISIS.

“For too long, Congress has been missing in action,” Lee said during a press conference on Thursday. “It’s unacceptable that while our brave service men and women face snipers and mortar rounds, Congress cannot even muster the courage to declare the war that they are fighting.”

North Carolina Republican Rep. Walter Jones added that he intends on personally urging House Speaker Paul Ryan to vote on a new AUMF. “I want to remind Mr. Ryan that he is denying members of Congress their constitutional duty, that we are sworn to uphold the Constitution,” Jones said, “and one of those duties is to vote whether we send our young men and women to die or not.”

2001 war authorization has been used 37+ times & in 14+ countries. America deserves more than a #CongressMIA on war. pic.twitter.com/LcZt5RLgWq

As usual @RepBarbaraLee speaks for me! On the need for Congress to debate and vote on war. #congressMIA pic.twitter.com/UgdExbhP8O

The Obama Administration has held that a new AUMF vote is unnecessary. The 2001 vote allowed the military to go after Al Qaeda and its affiliates. The administration argues that ISIS began life as Al Qaeda’s franchise in Iraq before splitting from the group founded in the late 1980s by Osama bin Ladin; therefore, a new authorization is not required.

Lee’s supporters aren’t the only ones skeptical of this argument. Earlier this month, a 28-year-old U.S. Army captain on active duty in Kuwait sued Obama, asserting that the president failed to “obtain from Congress a declaration of war or specific statutory authorization in order to wage the war against ISIS,” even though the plaintiff “believes that the operation is justified both militarily and morally… [but the illegality of the war] forces him to violate his oath to ‘preserve, protect and defend’ the Constitution.”

"We're here for one simple reason: When it comes to ISIS, Congress is missing in action." #AUMF #CongressMIA pic.twitter.com/VFd4Oso5Uw

We’ve been fighting #ISIL for nearly 2 years.When is Congress going to get around to debating this war? #CongressMIA pic.twitter.com/yC69IaLhrb

The U.S. military’s physical footprint in Syria is small. Last month, President Obama announced the deployment of 250 Special Forces soldiers to the country—which has been wracked by civil war since 2011, adding to the 50 already stationed there.

“It’s easier for the Republican majority to let Obama have blood on his hands than to give us the opportunity that we’re asking for to share the blood of our men and women in uniform,” Jones said during Thursday’s press conference. “But right now, the politics of this is why I don’t think we’ve had a debate on this, and I’m not sure we’re going to have a debate.”

As Stars And Stripes notes, these proposals face long odds. Last year, a similar effort would have pulled troops of Iraq and Syria without a new AUMF in place. It lost by a 149-vote margin.