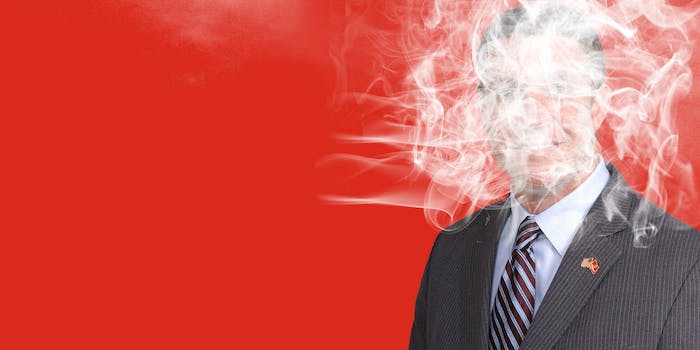 You thought the confirmation of Einstein’s theory about gravitational waves was big? Well, think again.

For the first time ever, a U.S. congressman vaped during a congressional hearing.

In the midst of a House Transportation and Infrastructure Committee hearing, Rep. Duncan Hunter, a Republican from California, proudly vaped in protest of an amendment that bans vaping on planes.

“This is called a vaporizer,” Hunter said. “There’s no combustion, there’s no carcinogens.”

wtf is going on at @Transport committee meeting?!@Rep_Hunter advocating for vaping on board aircraft. NOPE. #PaxEx pic.twitter.com/YV6s82F7r3

“There is no burning. There is nothing noxious about this whatsoever,” he added. “This is the future.”

Hunter had previously written an op-ed for The Hill in favor of e-cigarettes as a means for quitting smoking.

The amendment to prohibit “vaping’ on board aircraft has been upheld by @transport after a proper vote.
Was initially rejected by oral vote.

Last year, the Department of Transportation announced a ban on vaping on airplanes. Despite Hunter’s best efforts, that ban will now stay in place thanks to a vote of 33-26.