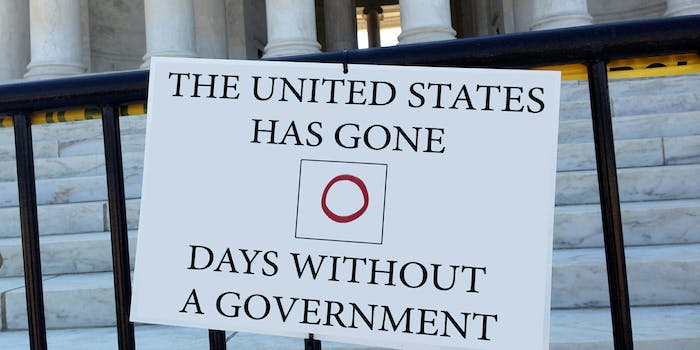 Stop us if you heard this one before: Just hours before the government was set to run out of money, Congress reached a tentative deal to keep the doors open.

This time, Republicans and Democrats settled on a $1.3 trillion spending bill that will carry the government to the end of the fiscal year: Sept. 30, 2018.

Now they have just two days to pass it.

The bill includes initial funding for border security, as well as an increase in funding for the military, two items touted by the president on Twitter last night.

Got $1.6 Billion to start Wall on Southern Border, rest will be forthcoming. Most importantly, got $700 Billion to rebuild our Military, $716 Billion next year…most ever. Had to waste money on Dem giveaways in order to take care of military pay increase and new equipment.

Except, unlike what the president claimed in his tweet, that $1.6 billion is not technically for his long-touted border wall. The money is allocated for border security, with $641 million to go to fencing and levees.

According to the Washington Post, some in the Democratic Party were willing to give Trump more wall funding for a deal to protect Dreamers, recipients of the Deferred Action for Childhood Arrivals (DACA) program, which Trump ended in September.

The White House reportedly offered three years of protection for Dreamers in exchange for $25 billion for wall funding, but Democrats held firm on giving these young people a path to citizenship.

Democrats refused to take care of DACA. Would have been so easy, but they just didn’t care. I had to fight for Military and start of Wall.

Minor compromises on the fringes of the immigration debate were reached, though, like keeping funding for sanctuary cities and preventing border security funding being used for deportation agents.

Meanwhile, the DACA program is currently being kept alive in the courts, but not every Dreamer is safe; since October, hundreds of DACA holders have fallen out of status every day, leaving them vulnerable to deportation.

The bill is a bitter compromise for both parties, who have been unable to achieve substantial legislation since tax cuts were passed. Efforts to provide funding to stabilize the insurance markets under Obamacare were skipped, and it doesn’t fund a major tunnel upgrade in New York and New Jersey that Democrats wanted. Instead, it gives funding to Amtrak, which can help kickstart the tunnel construction needed under the Hudson River.

Congress has until midnight Friday to pass the bill.