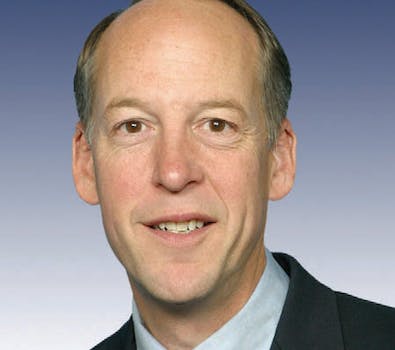 He's a good idea of what the current U.S. Congress is like: One party officially wants to say Internet freedom is a good thing. The other isn't quite so sure.

It’s a surprising battle, considering the House has previously agreed on a similar sentiment. But House Democrats say that Greg Walden (R-Oreg.)’s seemingly simple bill, full of broad, hard-to-argue sentiments like “it is essential that the Internet remain stable, secure, and free from government control,” is something of a ruse.

Anna Eshoo (D-Calif.), one of the few members of Congress to sign the Declaration of Internet Freedom, said groups like the FCC had “significant reservations” about the bill—specifically, that it was a backdoor way to enforce Republicans’ idea of net neutrality over Democrats’.

In simple terms, current net neutrality laws prevent Internet service providers from blocking what its users can access. Republicans have long argued that ruling is itself unfair, as it dictates how providers, as independent businesses, have to run.

The notion of Internet freedom as an international issue—specifically, condemning possibility of the United Nations’ International Telecommunications Union taking greater control over Internet regulation—is one of the few things everyone in D.C. has been able to agree on. The House and Senate have both passed unanimous declarations to that effect, as has President Obama, and both Democrats and Republicans have put similar language in their official party platforms.

In December, the ITU held the first of what could be years of negotiations in which it discussed granting itself greater regulation powers. A number of countries high on Reporters Without Borders’ “Enemies of the Internet” list, like China, Russia, and Saudi Arabia, supported the ITU’s initiative. Conversely, countries that topped Internet inventor Tim Berners-Lee’s “Web index,” like Sweden, the United States, and the U.K., argued against it.

“[There is] a concerted international effort—out of the view of most Americans—to drag the Internet within the purview of regulatory bodies such as the ITU,” Walden wrote on his website. “[T]he Internet is too important to the world to be overrun by governments.”

Eshoo said she’d sent Walden a letter with her concerns, but “no one sat down to meet with us.”

The bill will go before a mark-up Thursday.

Photo of Walden via Wikimedia Commons