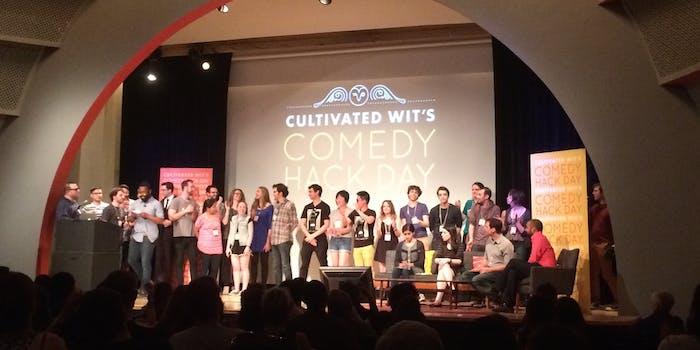 At Comedy Hack Day, the tech industry finally laughs at itself

Laughter is the best medicine.

I tried to be funny this weekend. Joining 84 others, I set out to build a product to satirize the startup industry. As part of Comedy Hack Day, an event hosted by Cultivated Wit that pairs devs and designers with comedians, I may not have succeeded—but it sure was fun.

A surprising number of comedians showed up. (The event didn’t have a button for “reporter,” so I took a comedian one—arguably the closest thing to my actual job.) It was the first time as a tech reporter I’d actually participated in a hackathon, and I was intimidated by two things: my lack of technical skill and the imperative to be funny.

Thankfully, I didn’t need to be. Comedy Hack Day fostered an environment more friendly than intimidating. The audience didn’t seem to hold any expectations about how complicated or funny anything needed to be. The only hard expectations were set by the judges, who banned pitches that were overly sexual in nature or had anything to do with ISIS (fair). On Friday evening, everyone pitched their ideas, which ranged from awkward to laugh-out-loud ridiculous.

Groups banded together, immediately assigning tasks based on skill level and talent, working into the very early hours on Saturday morning, and starting again as soon as General Assembly, the programming school hosting the event, opened its doors.

A trio of women worked in a small room in the back, and laughter poured out of the open door. Comedians Sriya Sarkar and Kate Sidley teamed up with technical frontend developer and college freshman Nicole Javorsky to create “Weather to Shave,” a website that shows you the weather and advises if you should shave that day. (It usually suggests you don’t bother.)

The real gem to come out of that particular group was Feminize It, a site that shows you the differences between Google searches for products based on gender. As the team said on stage, “We find the female versions of products so your little lady brain doesn’t have to.”

On Saturday evening, all groups pitched their ideas to the team behind Cultivated Wit, who determined which pitches would make it to the final round on Sunday. In the finals, comedian Michael Ian Black, tech writer Christina Warren, entrepreneur Anil Dash, and comedian Aparna Nancherla judged the final seven in a pitch event that felt much more like a night of standup comedy.

There was Textrospective, a Web service that can determine who holds the power in relationships based on analyzing the content of texts messages; BlackUp, like Uber but when you need a black friend; VenBro, for paying your female friends only 77% of the actual sum they asked for; and On the Job, an app that tracks how much money you make for all the time spent sitting on the toilet at work.

My idea—MailKids, a service that connects startups to children who will say their company’s name à la MailChimp—did not make the finals. Feminize It did, along with six others: Got This Thing, which  populates your calendar with real events so you can get out of invites with real excuses; Twrk, a gyroscope-based app that can track your hip movements; Days to Live, a text service that sends you reminders about your impending death; ForceFeed, a Chrome extension that turns actual news articles into GIF interpretations based on keywords; an app that uses Microsoft’s facial recognition to read your face and assign an emoji called Emoji-Me; and crowd favorite Pizza Blaster, an app that counts down how long you can stare at a pizza. (Everyone might have died of laughter simply because of the incredible comedic performance of app creator Alec Cohen.)

Although I had neither the ability to program an app nor a history of improv classes and professional stand up, I still felt like I belonged among the ranks of hackers and hilarious humans. When I pitched my project, the A/V system failed altogether, but the judges were kind enough to ask follow up questions.

Unlike the Stupid Shit No One Needs hackathon earlier this month in San Francisco, Comedy Hack Day focused more on software products rather than hardware, with comedians presenting the pitches. The entertainment and performance of the comedians was usually more important than the product, though all the apps were fully-functional.

In a culture so problematic that Silicon Valley feels more reality television than a scripted TV show, Comedy Hack Day was a breath of fresh air. An industry that so often feels like self-parody should take itself a little less seriously more often.