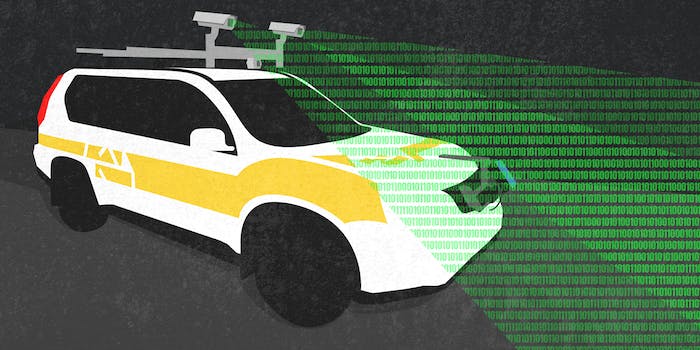 The Russian technologist has no need for a weapon today, but times were different in 1993. The Soviet Union had freshly dissolved and an emergent capitalist landscape was blooming in her country for the first time since 1917. With communism dictating the country’s economics for most of the 20th century, those nascent days of Russian capitalism were like the Wild West popping up in Eastern Europe. Like many others, Uskova wanted in. She started a niche software company called Cognitive Technologies—and her first visit from the mafia came soon after.

“He had never worked with a woman before and couldn’t look me in the eyes, but he wanted 5-10 percent of the business in exchange for protecting us from other gangs,” Uskova tells the Daily Dot, recalling the 1993 incident. “He thought we sold computers. I said, ‘No, I sell optical character recognition systems.’ Then I described the mathematical model for OCR to him for the next 15 minutes. He said, ‘Call me when you have a real business.’”

Uskova already had a real business, and she’s been developing it ever since. Cognitive Technologies not only has a lucrative piece of the Optical Character Recognition (OCR) software business today, but also deals in text parsing, voice recognition, and government e-buying. In 2019, the company boasts 1,000 full-time employees, $430 million in revenue, and contracts with the likes of Samsung, Hewlett Packard, Canon, and Oracle.

“We’ve had a lot of success selling algorithms,” Uskova jokes.

The software company adjusted course in 2014, investing resources to develop a lucrative, potentially world-changing algorithm: autonomous driving. After five years, Cognitive Technologies now boasts compelling proofs of concept for taking the human element out of driving across public and private transport, as well as in the agriculture industry. Rather than dabble with expensive Google-style spinning laser arrays called LIDAR, Uskova’s team has a novel low-cost workaround for replicating this driverless experience at a fraction of the price.

Whether the company’s system is installed on a tractor, a tram, or someone’s personal car, the three-ingredient recipe that makes it work is the same: video camera, radar, and software.

The software is called Cognitive Pilot and is fairly contextualized as the brain of the system. It processes incoming visual input from the camera and interprets positional data from the radar. Machine-learning algorithms put the remaining pieces together, identifying objects in the roadway while the radar gives a precise measurement of where those objects are and how fast they’re moving.

This artificially intelligent system is “artificially intuitive” as well. Cognitive Pilot not only has a high-resolution understanding of what is happening on the road, but it builds a prediction of what it thinks will happen several seconds into the future.

Video cameras are generally cheap and plentiful, and the issue of developing advanced software was a straightforward proposition for Uskova, who had an experienced, capable tech team at her command. If there were any major hurdles to clear in bringing this driverless vision live, it was the radar. It needed to be “four-dimensional” to work properly.

The everyday radar we know and love is two-dimensional, only giving readings for range (how far away something is) and bearing (which direction it’s moving). Aviation applications call for specialized 3D radar, which can additionally determine elevation. But this one needed to be able to do all three while simultaneously being aware of its own speed and motion. Cognitive Technologies ended up developing it in-house.

It’s called the Cognitive Imaging Radar, and here’s what it looks like:

Where the driverless LIDAR systems used by Google can cost up to $75,000 per car, this radar will only cost a few hundred dollars to make, Cognitive Technologies says. It is more accurate than LIDAR in rainy or snowy conditions, and furthermore lacks the mechanical, moving parts that LIDAR requires to work.

A seemingly de facto choice for so many players in the driverless space, LIDAR has known pitfalls. A blog post by Comet Labs Research describes how LIDAR is periodically blind to what is immediately in front of it by virtue of how it operates:

“[The fastest LIDAR system can rotate 10 times per second, so] this is the limiting refresh rate of the data stream. A car moving at 60 miles per hour travels 8.8 feet [with each tenth of a second], so the sensor is essentially blind to changes that happen as it travels those 8.8 feet. Perhaps more importantly, the range of LIDAR (in perfect conditions) is … less than 400 feet, which equates to less than 4.5 seconds of travel time for a car moving at 60 miles per hour.”

The automotive industry is taking note—Cognitive Technologies had representatives at driverless technology show TechAD in November, and the radar seemed well-received. “With help from manufacturing partners, we’ll produce 4 to 4.5 million radars per year by 2022,” Uskova maintains. “As for now, we have a pre-order from a car manufacturer for 200,000 units.”

What if Google is wrong about LIDAR being the thing to make autonomous vehicles ordinary and accessible for everyone? What if giants in the space like Waymo are limiting our thinking about driverless cars, automatically defining them for everyone else as vehicles with spinny things on top? What if it’s a Russian woman to lead us to a future where driverless cars are so normal as to be boring?

These are questions that Uskova seems well-positioned to answer in the near future.