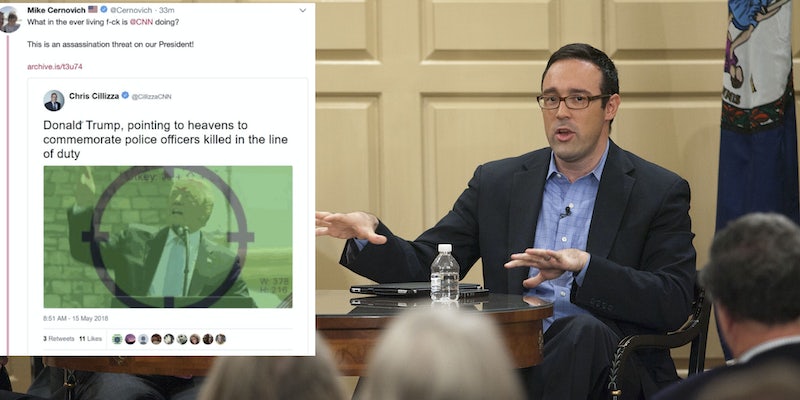 This does not look good.

Conservatives have long believed that CNN has harbored an implicit bias against the president, and today they think they found their smoking gun.

A tweet by CNN Editor-at-Large Chris Cillizza showed what could be considered Trump in a gun sight. The article linked to a story about Donald Trump speaking at an event honoring fallen police officers.

The image was quickly picked up by conservative and right-leaning users on Twitter, upset over the portrayal and implication.

CNN's Chris Cillizza claims that his tweet that showed crosshairs on President Donald Trump was "unintended," as he blamed the GIF maker that he uses.

Cillizza has tweeted five GIFs of Trump over the last 24 hours that don't have crosshairs on them. pic.twitter.com/nSXwTaYQcD

Almost immediately after the uproar, Cillizza deleted the tweet and apologized, blaming it on a GIF maker.

I’ve deleted a GIF about President Trump. We use @GifGrabber to make our GIFs and it defaults to the image below as a first frame. To clear up any unintended confusion, I’ve removed the tweet. pic.twitter.com/x6PCKoiW16

CNN’s Chris Cillizza seems to think it's OK to post an image of Crosshairs aimed at the president of The United States of America!

People didn’t buy that excuse, however.

While some in the media jumped to Cillizza’s defense, viewing it as an unintentional accident and deserving of the benefit of the doubt, others were less inclined.

When reached by the Daily Dot, Mike Cernovich, a conservative-leaning journalist, pondered how liberals would react if the president had posted an image of a journalist in a similar fashion.

“If Trump tweeted that out about a CNN anchor, what would [CNN] have said?” Cernovich wrote. He also referenced an Atlantic piece in 2011 that openly questioned whether a Sarah Palin ad was responsible for the Gabby Giffords’ shooting, a theory that has been discredited.

However, Cernovich, who originally posted about the image and helped kick-start the frenzy, deleted his tweet. When asked why, he wrote, “What if we collectively agreed to presume people are making honest mistakes, and give people some time to explain? That would be a better world.”

What a novel concept.