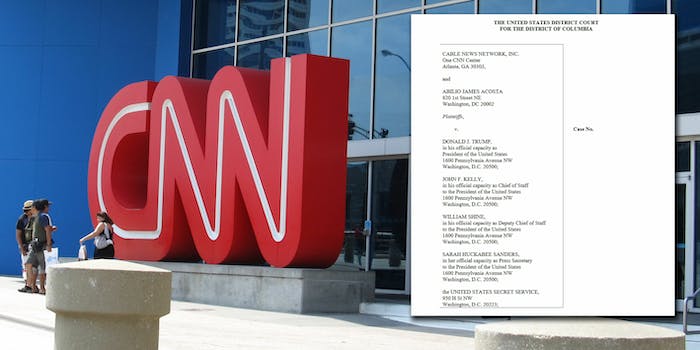 The lawsuit alleges that the the company and Acosta's First Amendment and Fifth Amendment rights were violated.

CNN has filed a lawsuit against President Donald Trump and a number of his aides after his administration revoked reporter Jim Acosta’s press pass following a press conference last week.

The White House contends that Acosta placed his hands on an intern during the press conference and posted a video that appears to have been sped up to make it appear the physical contact was more intense than it was.

The lawsuit alleges that the company and Acosta’s First Amendment and Fifth Amendment rights were violated. The suit names Trump, Chief of Staff John Kelly, Communications Director Bill Shine, White House Press Secretary Sarah Huckabee Sanders, and the director of the Secret Service, among others, as defendants.

“This severe and unprecedented punishment is the culmination of years of hostility by President Trump against CNN and Acosta based on the contents of their reporting—an unabashed attempt to censor the press and exclude reporters from the White House who challenge and dispute the President’s point of view,” the lawsuit reads.

In a statement, CNN said the press pass being revoked “could have happened to anyone.”

“If left unchallenged, the actions of the White House would create a dangerous chilling effect for any journalist who covers our elected officials,” the company said.

This morning, CNN filed a lawsuit against @realDonaldTrump and top aides. The White House has violated CNN and @Acosta's First Amendment rights of freedom of the press and Fifth Amendment rights to due process. Complaint: https://t.co/43oX6L8xA7 pic.twitter.com/RvJ0Cgh6oi

The case was filed in the United States District Court for the District of Columbia.

In response, the White House issued the following statement.

“We have been advised that CNN has filed a complaint challenging the suspension of Jim Acosta’s hard pass. This is just more grandstanding from CNN, and we will vigorously defend against this lawsuit.

CNN, who has nearly 50 additional hard pass holders, and Mr. Acosta is no more or less special than any other media outlet or reporter with respect to the First Amendment. After Mr. Acosta asked the President two questions—each of which the President answered—he physically refused to surrender a White House microphone to an intern, so that other reporters might ask their questions. This was not the first time this reporter has inappropriately refused to yield to other reporters.

You can read all of CNN’s lawsuit here.