Remember that opening scene in Clueless where Cher picks out an outfit by scrolling through various pieces on her computer and virtually trying them on? Remember how you first saw that when you were 8-years-old and you were like, “Omigod, I can’t wait till I’m a teenager so I can do that with my wardrobe,” and it took you until your early twenties to realize it wasn’t actually a thing, catapulting you into a chronic state of profound despair? Well, perk up, because NOW IT IS A THING.

The retail company Metail has created #ShareYourCher, a feature that allows you to virtually try on Alicia Silverstone’s ensembles from the film. (Yes, that adorable yellow tartan skirt suit is there. No, the white collarless shirt from Fred Segal isn’t. Sorry, guys. You’ll have to find another capable-looking outfit to wear to your driver’s test.)

To create your own “MeModel,” all you have to do is click the outfit you tried on and enter your height, weight, and vital measurements. (Metail is based in the U.K., so if you’re in the U.S. it’s best to have Google’s units converter pulled up on your browser.) I put my measurements in and tried on the yellow tartan skirt suit combo that Iggy Azalea also wore in the “Fancy” video, and this is what the site came up with: 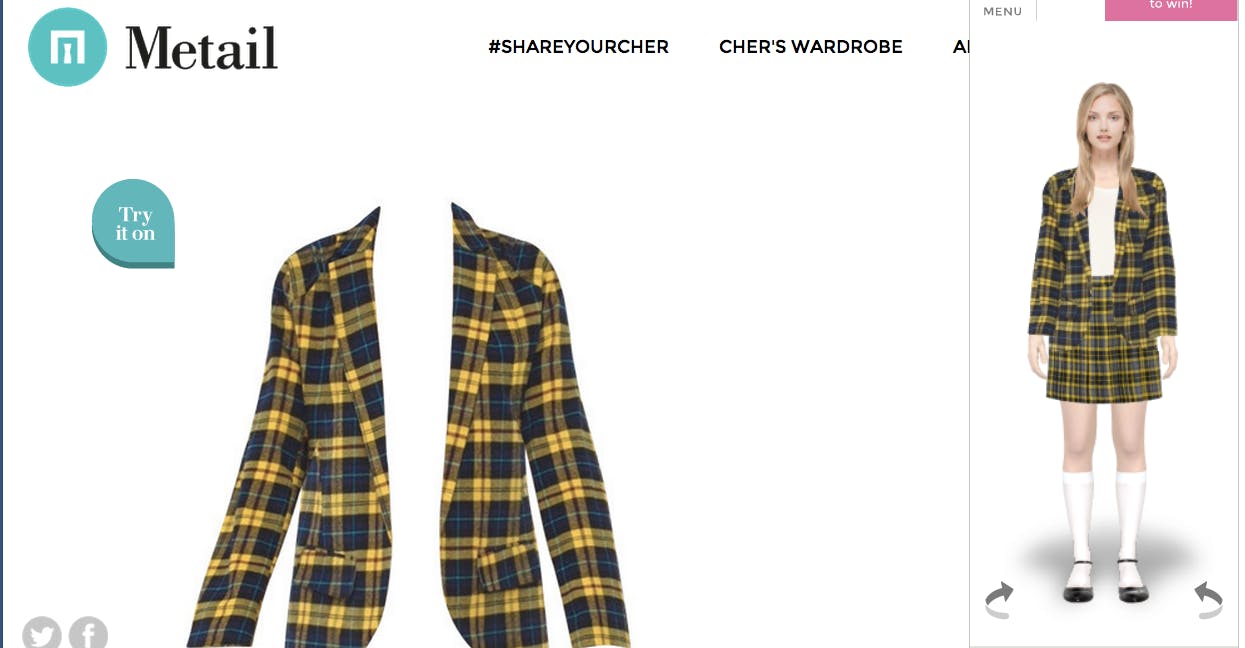 (In the interest of accuracy, I’d like to point out that Metail doesn’t get it totally right, because as you can tell from the Iggy Azalea video, Cher also wears a yellow button-up crop vest under the blazer. But meh, close enough.)

While you can’t replace the sultry, wan-looking model’s face with your own, you can adjust the model’s hair and skin tone to make it more like yours. The goal is to get the model’s proportions to match yours as closely as possible, and I’d say it was actually pretty successful in that regard. (Though I’d like to think that unlike the model, my posture is slightly better than that of a cave lady from the Middle Paleolithic era.)

If you tweet your creation or post it on Facebook with the hashtag #ShareYourCher, you also have the chance to win £500 worth of Cher-inspired swag. But otherwise, the garments are unfortunately not available for sale. That’s way harsh, Tai.