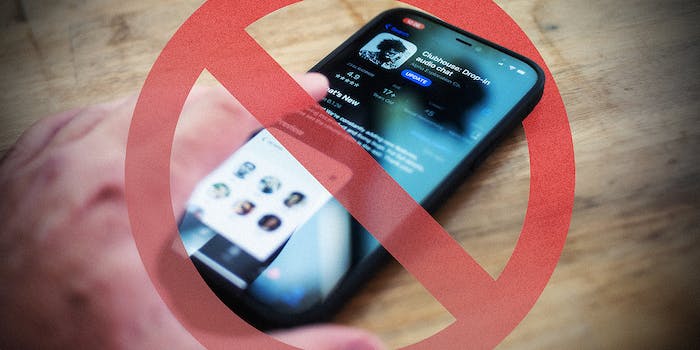 Clubhouse’s desire for exclusivity is harming the Deaf community

Clubhouse, the hottest app on the market with an invite-only user base, is coming under fire for excluding accessibility features for users in the Deaf community.

The app, which launched in April, hosts live and unsaved seminars in which speakers can talk to a room of listeners. The design of Clubhouse tries to promote exclusivity—but prohibits transcriptions of chatrooms so content does not leave the app. For that reason, deaf or hard of hearing people are left out of the platform entirely.

But advocates for the Deaf community are tired of accessibility being an afterthought, saying a new platform can’t ignore the 48 million Americans who have some form of hearing loss, according to a 2011 study by Johns Hopkins Medicine.

Journalist and accessibility activist Liam O’Dell, who is Deaf, says considerations for the Deaf community should be discussed prior to a new app or feature launch.

“It’s quite frankly disgusting and appalling that [Clubhouse] hasn’t addressed this one year on,” O’Dell told the Daily Dot. “I find it hard to believe that the two founders are not aware of the feedback from the disability community and allies around accessibility.”

One Twitter user says he was kicked off of the app for transcribing a room for accessibility reasons.

“I have been suspended from @joinClubhouse for providing a live transcription to a room. Yes, for providing accessibility. Even worse, was a member of the VI community that reported me to prove her point she wanted to make,” the account tweeted.

In the replies, the user said the transcriptions violated Clubhouse guidelines, but he was later reinstated onto the app.

Clubhouse states in its community guidelines that “you may not transcribe, record, or otherwise reproduce and/or share information obtained in Clubhouse without prior permission.”

That rule inhibits anyone with a hearing disability from participating in a chatroom. Meanwhile, Clubhouse promotes “inclusivity” in its guidelines.

“Be inclusive. Tolerate, welcome, and consider diverse people and perspectives,” the company states.

The needs of the Deaf community are protected by law. The U.S. Ninth Circuit has reaffirmed a law that demands websites and mobile applications comply with the Americans with Disabilities Act, according to law firm Blank Rome.

The ruling came after Domino’s Pizza failed to include accessibility features for blind people on its online ordering site.

Even with support of the law, people in or who support the Deaf community have repeatedly voiced their anguish regarding the Clubhouse’s shortcomings for deaf people.

“I’ve only used Clubhouse once a while back, so I might not be hip to any changes, but a friend, an ASL interpreter was asking about accessibility and I never found an answer,” one account tweeted.

Another Twitter user, Ashlee Boyer, told the Daily Dot that she feels the Deaf community is tired of demanding accessibility.

“We keep having to repeat ourselves every time someone comes up with something ‘new’ about how audio-only content excludes us. It is very tiring dealing with that on top of being excluded,” she said.

“I can’t consume anything from Clubhouse. Deaf people have been pointing this out for weeks, loudly. If you still choose to go over there and spread your content, it just tells me you don’t care if any of us want your content. That’s sad,” Boyer posted.

O’Dell says he prefers Twitter Spaces because the company included deaf people in the beta testing of the new feature to ensure it provided sufficient accessibility.

“This. It’s why I’m solely using Twitter Spaces. While far from perfect, at least they’re making an active effort to integrate accessibility from the very start of the process, and build upon feedback as they go along. Clubhouse, meanwhile, have repeatedly ignored our requests,” another account added.

But the fight for increased accessibility for the Deaf community online exists on all platforms. On TikTok, advocates encourage closed captioning on videos.

TikTok is slowly rolling out features to helps its deaf users. ChrissyCantHearYou posted a video about the app’s new feature, currently available on some Androids, that automates captions to be more accessible for deaf or heard of hearing viewers directly on the app.

Prior to this, users would have to download third-party apps in order to automate captions.

O’Dell says deaf people only find increased accessibility after urging social platforms to do so.

“Right now, it seems like these firms deliberately invite backlash over their product being inaccessible in order to determine whether access is ‘worth’ investing in. However, these companies forget the fact that access isn’t a demand; it’s an expectation,” O’Dell says.

On Clubhouse, however, no moves have been made to include deaf people on its platform. Clubhouse did not respond to a request for comment.