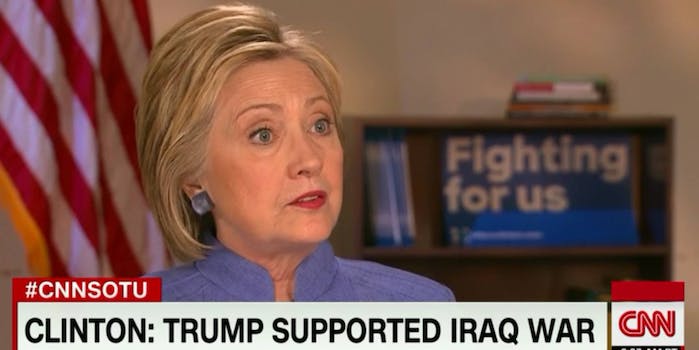 'We have evidence and audio of him supporting it.'

In a nationally televised interview on CNN’s State of the Union, Democratic presidential frontrunner Hillary Clinton gave a few more glimpses of how she plans to take on GOP presumptive nominee Donald Trump.

The former secretary of state has had a fairly busy week aggressively going after the Donald. Her foreign policy speech attacking his “bizarre rants,” “personal feuds,” and “outright lies” was widely regarded as one of the strongest of her campaign.

While speaking to CNN’s Jake Tapper on Sunday, she got very specific, taking on one of Trump’s favorite, long-standing false claims about himself: That he opposed the Iraq War before it started, showing a prescience and foresight that the American political establishment lacked.

This is demonstrably untrue, and that’s been plain as day for months. As BuzzFeed’s Andrew Kaczynski chronicled all the way back in February, in the run-up to the Iraq War, Trump made a number of statements in media interviews that certainly didn’t signal his opposition.

He told Howard Stern “yeah, I guess so” when asked if he supported an invasion on September 11th, 2002. In an interview with Fox News’ Neil Cavuto, he again declined to voice opposition, saying “it’s sort of like either do it or don’t do it.”

Trump’s claims about his explicit judgement in opposing the Iraq War appear not to hold true to criticism. And Clinton made it clear that she’s planning to call him to account.

“Well, he supported it. We have evidence and audio of him supporting it, so I think that’s another example of him trying to rewrite history.”

While Clinton has made a point of refusing to engage with the substance of Trump’s attacks on her, it’s becoming clear since her searing anti-Trump speech earlier this week that she’s going to attack any and all areas where Trump has fibbed.

Regarding the invasion of Iraq, Clinton’s initial sentiments were far different from her current stance. In 2002, the then-senator voted in favor of the bill authorizing the Iraq war, alongside with 28 other senate Democrats. The resolution passed by an overwhelming majority of 77-23.

In the years since, her decision to go with the prevailing political tides cost her dearly: It was one of the keystone issues that wounded her during the 2008 primary race against Barack Obama. She has since copped to it being a mistake.