To be absolutely clear, you cannot vote by text.

Twitter came under fire this week after failing to act on accounts pushing out false voting information in what appears to be an attempt to mislead Hillary Clinton supporters.

The tweets falsely informed voters that they could “save time [and] avoid the line” on Election Day by opting to vote by text instead, sending the word “Hillary” to an obscure number associated with text-based marketing campaigns. The fake advertisement graphics even included small print claiming to be funded and endorsed by the Hillary Clinton For President 2016 campaign. 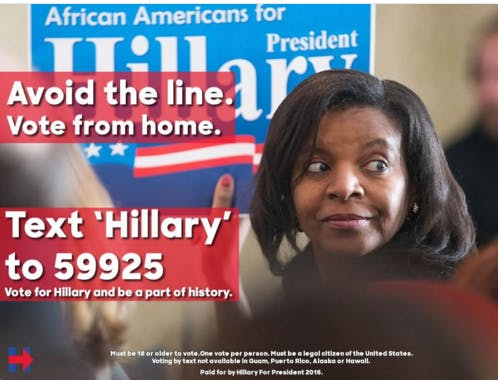 After noticing the deceptive ad while browsing the feed of alt-right Twitter personality @TheRickyVaughn, Loyola University physics professor Robert McNees quickly reported what he viewed as a fraudulent attempt to deceive the electorate.

Contacting Twitter through its formal support channel, McNees received a response from the company stating that the flagged tweets were “not in violation of Twitter Rules”.

Twitter just informed me that attempting to disenfranchise voters is not a violation of their Terms of Service. @jack @Support pic.twitter.com/YXVdt8sHwA

When the media contacted Twitter’s press officers for comment, the company quickly changed its decision and suspended the @TheRickyVaughn account.

not sure how this got past us. Fixed (and thanks for reporting)

By that time, however, the deceptive campaign had been gathering significant momentum. Right now, as the fake ads trickle throughout the network, containing the outbreak of misinformation is proving difficult. It’s not hard to find naïve Clinton supporters and malicious trolls alike pushing the message along.

Similar kinds of campaigns have been circulating for weeks, with a previous version telling Clinton supporters that they can vote online or by tweeting hashtags.

To be absolutely clear, you can not vote online or by text. Make sure friends and family know to avoid schemes like this and stick to the conventional means of voting. It’s the best way to make sure that your vote is counted this election.