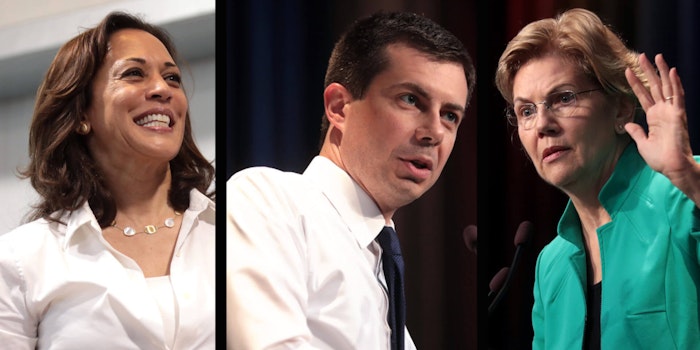 A flurry of plans were announced in the run up to tonight's town hall event.

A number of 2020 Democratic presidential hopefuls unveiled their own plans to combat climate change on Tuesday and Wednesday ahead of a town hall-style event that will allow them to pitch their vision to potential voters.

Sen. Kamala Harris (D-Calif.), Sen. Elizabeth Warren (D-Mass.), and Mayor Pete Buttigieg all rolled out proposals recently. Tonight, 10 of the Democratic candidates will be interviewed by CNN anchors about climate change and their plans to address it during a seven-hour event.

Here’s a brief look at the most recent plans that have been announced:

Harris’s plan calls for $10 trillion in public and private funding to create a “clean economy” by 2045, ending federal subsidies for fossil fuels, and placing a “progressively increasing fee” on polluters, among other things.

It also calls for Congress to pass the Climate Equity Act, a bill that was introduced by Harris and Rep. Alexandria Ocasio-Cortez (D-N.Y.) and to protect 30 percent of the land and oceans in the United States by 2030.

The climate crisis is an existential threat that demands bold action. My climate plan will take on powerful interests and build a clean economy, create millions of jobs, and guarantee every person’s right to breathe clean air and drink clean water.https://t.co/AH71W9cPJh

Meanwhile, Warren evoked the plans of former 2020 hopeful Gov. Jay Inslee (D), who ran a climate change-focused campaign but dropped out of the race on Aug. 21. In a plan published on Tuesday, Warren said she wanted to build on Inslee’s 10-year action plan and challenged “every other candidate for president to do the same.”

Warren said she would reverse the tax cuts pushed by President Donald Trump to pay for pushing the United States to 100 percent clean energy within 10 years. The plan calls for all new buildings to have no carbon pollution by 2028, many cars to have zero emissions by 2030, and electricity generation to be renewable and zero-emission by 2035.

The plan also calls for providing job training, benefits, and a wage guarantee for workers who are affected by the transition to renewable energy, among other things.

.@JayInslee provided bold, detailed ideas on how to confront climate change, and his ideas should remain at the center of the climate agenda. Today, I'm adopting and building upon his ten-year action plan to achieve 100% clean energy for America. https://t.co/NOuqrY9IEU

Buttigieg, who released his plan on Wednesday, called climate change “one of the greatest tests in our history” and outlined a timeline of how he, if elected, would push the United States to net-zero emissions by 2050.

The South Bend, Indiana, mayor said he wants to double the country’s clean energy generation by 2025; build a clean electricity grid and require passenger vehicles to have zero emissions by 2035; have heavy-duty vehicles, buses, trains, ships, and airplanes be net-zero in their carbon emissions by 2040; and have all industries be net-zero by 2050.

For too long D.C. has chosen denial and obstruction as we’re faced with the imminent catastrophic effects of climate change. But science compels us to act—and we're running out of time. Today, I'm announcing a plan to unite America to meet this challenge. https://t.co/4KFD800NKq

Other candidates who have rolled out their plans for climate change in recent weeks include Sen. Bernie Sanders (I-Vt.), Sen. Cory Booker (D-N.J.), and Sen. Amy Klobuchar (D-Minn.). Others have pushed plans earlier in their runs.